Dr. Laura Schlessinger is being posited as the latest in a victim of liberal attacks on free speech, most notably by Sarah Palin, who claimed on Twitter this week that Schlessinger was forced to step aside “bc her 1st Amend.rights ceased 2exist thx 2activists trying 2silence” her and that that was “not American and not fair.”

This, of course, begs a couple of serious questions:

Oh wait, I know exactly where Sarah Palin was when Helen Thomas was forced to resign, because she saved her own tweet about it in her “favorites”: 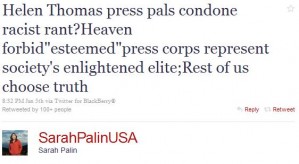 Palin was quite clearly on the side of getting rid of Helen Thomas for a single comment, despite years of incredible work as a journalist. But when it comes to Dr. Laura Schlessinger, whose years of work as a radio personality include calling gay people a “biological error” and telling abused women they “asked for it,” Palin is suddenly concerned about free speech.

Nevermind the fact, of course, that our Constitution’s first amendment does not guarantee anyone the right to a public audience, as Rashad Robinson so eloquently explains in this piece.

What it comes down to, in my view, is that Sarah Palin (and her Tea Party ilk) think it’s okay to invoke one’s free speech for the sake of racist comments, but that those who defend against racism (or more accurately, those who defend Muslims) should be shut down.

4 replies on “Palin and the First Amendment”

So hard to understand the Palin “phenomenon.” She is so wrong on so many scores that one wonders if she is for real! The unfortunate answer seems be be “yes, she is” and she’s here to stay! God help us.

I agree with you completely, but Helen Thomas’ statements were racist and ignorant too. She and Dr. Laura shouldn’t have a public audience.

We can agree to disagree on Thomas, but still agree that there’s a double standard here :)