I am really fucking tired of seeing my good friends, one by one, arrested by hideous regimes. First it was Ali, who remains in hiding from the US-supported Bahraini government, then it was Slim (who thankfully went free shortly thereafter), then Alaa, who might miss the birth of his first child because of the US-supported SCAF and now my dear sweet Razan…while the US is by no means responsible for the atrocities of the Syrian regime, I sincerely hope that they take the arrest of a US citizen (which Razan happens to be, by birth) seriously. 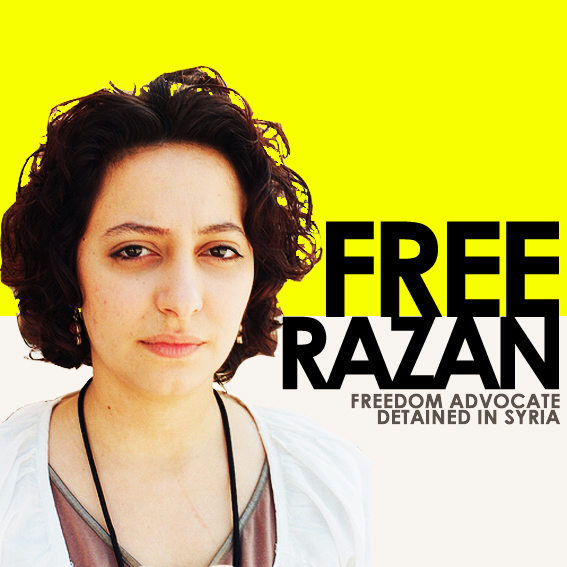 Razan had been afraid of arrest. On Wednesday, she warned me that it might happen. I honestly have no idea of the circumstances, though it is said that she was near the Jordanian border. I don’t know if she was trying to escape.

Razan has been a friend of mine since we met in Budapest in 2008, her first trip to Europe, and her first flight in years. We kept in touch and when I visited Syria the following year, she and Anas and I met up for dinner one night, drinking into the late hours at his apartment, laughing as we always did. I saw her again later that year in Beirut and then most recently in Tunis where, with everything happening in Syria, she seemed to have retreated into herself; we barely had time to connect. Since then, however, she’s been working with the Syrian Center for Media and Freedom of Expression and we’ve therefore had numerous reasons to be in touch, numerous conversations, most recently this week, when she shared her contingency plan with me (part of which involved shutting down her various online accounts so as not to put her contacts at further risk).

I’ve tolerated–to varying degrees–the pro-regime nutjobs on Twitter and Facebook for months, with a semblance of understanding as to why they oppose the opposition (I do not, however, understand in the least support of the Assad regime). But the shitstorm that I witnessed tonight, the hatred I saw toward Razan simply for exercising her right to free expression, a universal right, instills new anger in me. Some of the same assholes who justify the Syrian regime’s violence toward the opposition because the opposition too has used violence balk when other countries do the same. Their standards are different, because to them, because of their brainwashing, the Syrian regime is somehow different.

5 replies on “Another Arrest”

Jillian, she was arrested when trying to cross boarders to Jordan to attend a workshop at the Center for Media and Freedom of Expression.

Why shouldn’t criminals be arrested and tried?

Doesn’t that happen in your country too, Jillian?

Oh wait…right. Your country mass-murders people with Predator drones, without trial. Even US citizens. Mass-murdered by US murderers with their wife and children for exercising the right of free speech.

But you don’t feel anything for them.

Where is your “anger” because your government (sponsored by your taxes) mass-murders innocent civilians “simply for exercising their right to free expression”?

No word from you about that.

The US gov’t funds you only for having feelings for and writing of behalf of those pro-US Hipsters.

You are an asshole. Obviously from the ProAssad regime camp!!

[…] Another Arrest: [Jillian C. York is] really fucking tired of seeing my good friends, one by one, arrested by hideous regimes. First it was Ali, who remains in hiding from the US-supported Bahraini government, then it was Slim (who thankfully went free shortly thereafter), then Alaa, who might miss the birth of his first child because of the US-supported SCAF and now my dear sweet Razan… […]