Since releasing my paper, Policing Content in the Quasi-Public Sphere, a few weeks ago, I’ve begun noticing small changes to the Facebook platform.  No, I’m not talking about the new Groups (which I’ve duly ignored).  I’m talking about small but pointed changes pertaining directly to items I’ve complained about in the past.  I wish I could take credit, but no matter – if these changes lead to a better Facebook for all of its users (and not just the white Americans Zuck seems to wish were its demographic), I’ll be thrilled.  After all, Facebook is here to stay.

So what are the changes?  First is to the Terms of Service.  In my paper, I noted that, “though Facebook is available in over one hundred languages, the TOS are available only in English, French, Spanish, German, and Italian.”  At Google’s Internet Liberty at 2010 in Budapest, I spoke to Lord Richard Allan, who acknowledged my complaint but explained that the help and privacy centers were both available in 20+ languages, and that, while the legal implications of translating the TOS made translation complex, they were working on it.

Late last week, I noticed some progress.  First off, they’ve added this bit at the bottom of the page:

They’ve added Japanese and Turkish to the list of translated languages – a great start, if you ask me.  Also, the new framework certainly makes it easier to add more languages quickly.

Next thing I noticed was the “report” mechanisms.  Now, I still find it problematic that Facebook employs an automated system of some kind post-reporting (the details of which I’m unaware, but which undoubtedly relies upon keywords).  Nevertheless, this detailed system of reporting allows for fewer false reports.  Here are a couple of screenshots of the reporting mechanism that shows up when reporting a group or page for a TOS violation:

The level of detail is helpful, certainly, particularly, I would imagine, for Facebook’s content regulators, who undoubtedly see thousands of complaints each day.  I have no idea how Facebook’s internal systems work on such things, but I would imagine that this makes it easier to sort complaints to specific staff members, or to automate complaints of nudity using flesh detection imaging software.  Here’s the final screenshot: 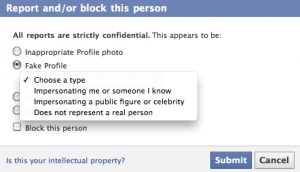 I see this last bit as a small improvement as well, with a caveat (read on).  I take strong issue with Facebook’s “real name” policy, for a number of reasons that I’ll elaborate on in another post.  Nevertheless, policy is policy, and enforcing that policy can be a bit…let’s say, uneven.  I’ve seen people with real names like ‘Najat Kessler’ asked for their identification to prove their profile is theirs, while hundreds of profiles for ‘Santa Claus’ remain online.  And frustratingly, the Najat Kesslers of the world are undoubtedly reported by other users who seek a way to push them off Facebook (yes, people target people in this manner; I’ve seen campaigns on Twitter for it).

What this new mechanism offers is three distinct complaint choices.  The first is a no-brainer; though Facebook allows for parody profiles (unless they’re of Moroccan royalty, that is), impersonating a celebrity is another story.  The third is interesting in the way it’s worded: “this profile does not represent a real person.”  Thus, a profile for ‘Santa Claus’ is undoubtedly in violation, but is a profile for ‘Amanda Q.’ when Amanda Q is a real person?  It would seem that using a partial version of one’s real name is not actually in violation of the Terms.  The Terms are clear that users must use their real names, but this reporting mechanism does not necessarily allow for reporting use of a pseudonym by a human being.  I digress.

In any case, kudos for Facebook for baby steps in the right direction.  I’m looking forward to many more.

One reply on “A Few Positive Baby Steps for Facebook”