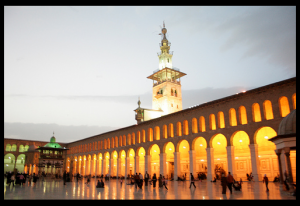 There’s something different about this one.  There’s a way of photographing it from a specific angle that makes it seem as big as a city (I didn’t do it justice, but this photo does) or as if it lies on the edge of the ocean.

There’s this feeling of nostalgia that sometimes washes over me, but it’s so faint I can’t grasp it; it’s neither rooted in reality nor entirely made up…it feels like a mix of some movie I saw or some song I heard once, a long time ago combined with the feeling of glimpsing into the life of a stranger through some photo album stumbled upon by accident.  I’m surprised there’s no term for it, that feeling of longing for something you’ve never experienced.  I’m sure there is in some language. 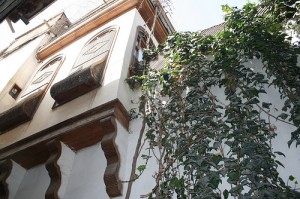 Syria invoked that feeling in me.  There’s something about the streets of Damascus that feel like they ought to be familiar, as if by one twist of fate I could’ve been born in a city 5,460 miles away. I don’t know why, really; it’s not as if I spent my childhood reading books about the place, like I know so many of my friends who came here from somewhere else spent their childhoods doing.  It just is. I suppose I felt the same way about Prague once upon a time.
I don’t know if I’ll ever understand what it is that causes a specific place to just sing to me, but I wish I did.  I suppose it’s no different than wondering why writing calls to me, or why I’m driven to fight for freedom of expression.  It just is. 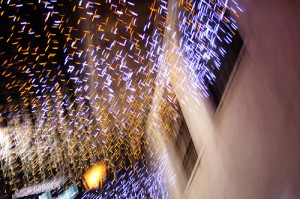 Because I arrived so late, or perhaps because I was visiting someone, I didn’t notice much on my first night there.  But the next morning, as I greeted the day, I was blinded by a mid-March sun that made me forget the chilling Boston cold I’d come from.  I wore sandals and smiled at children.  I took absurdly artsy photos in the late-night street and I ate copious amounts of falafel.  I rode in a Tartoussi taxi for more than 2 hours in the rain in a failed attempt to find a hotel.  I never wrote about it.  I wanted to.

The truth is, many of the details of my travels are too precious to me to write about, too intimate.  Others are just to difficult to put into words.  I’ll never pen a memoir of my solo travels around Morocco because I don’t know how to be literary when it comes to crouching in dark Marrakshi alleys while my friends play poker.

I wish I could articulate my faux-nostalgia.  Because it isn’t just Syria.  When I was 22 and the Peace Corps gave me a yes to Central Asia, I went out and bought the Lonely Planet edition and read it cover to cover.  It reminded me of the travel guides I’d read on Prague ten years earlier, only a few years after the Velvet Revolution.  Everything had seemed so distant; there was not yet a McDonald’s and an H&M in Wenceslas Square and the British stag parties hadn’t yet descended on the city.  That was Prague in 1994, and this was Central Asia in 2004, and in five years, I don’t know if it will exist at all.

Such is the changing shape of the world, I suppose.  But while the McDonald’ses and H&Ms of the world continue to creep insidiously in, places like these won’t cease to exist.  Which means there is still, somehow, room for remembering those things you’ll never experience.

4 replies on “On Faux Nostalgia”

Wow these are some beautiful pictures. I went traveling in Asia and didn’t capture half as nice of pictures as these lol.

When you were in peace corps, did you get a lot of free time to explore on your own? or were you kind of stuck to a schedule that didn’t let you roam too much?

That’s an interesting conundrum. I often wonder if it’s because the place fulfils some need in you – as if those streets, and those smells represent something you’ve been missing in your life, and (not consciously) searching for. Maybe that’s why some people are able to say they feel at “home” in a place they’ve never been to before. Some places just feel right to some people.

I never actually did Peace Corps – I’ve written about this before, but basically, when it came down to it, I didn’t want to be tied to any organization.

Thanks for the photo compliment!

Isn’t that such a strange thing, though? I spent two years in a country that never really sang to me that way, and ten days in one that felt like home. Sometimes things just make sense.