I woke up one morning last weekend with visions of Twitterplums dancing in my head. In other words, I was mulling over the concept that I hold so dear: that Twitter enables, rather, encourages open communication in a way that was never before possible.

The examples are abundant: there’s the open sharing of the Twitter API and all of the programs that utilize it; the use of Twitter for customer service (check out @comcastcares or @zappos); and then there’s my favorite, the use of Twitter to enable free and open discussion between a number of parties who probably never would have connected otherwise.

Oddly enough, shortly after I woke up and was mulling this over, I looked up at the TV to see ABC’s John Berman (aka @abcdude) talking about Twitter. I turned up the television; Berman’s piece, which featured Twitter power user @MCHammer focused on the basics of Twitter, mostly for the uninitiated, and in that sense, it was a success. I think even my mostly-computer-illiterate father could grasp Twitter from that piece.

But what about beyond?

In our culture, we hold certain people to a higher esteem: doctors, lawyers, writers, and of course, celebrities. Weekly tabloid magazines feature columns to prove these famous folks are just like us, while average folks snap photos with their cell phones at the very sighting of an A-lister. And while most TV reporters are able to walk the streets without harassment, we still regard them as the other – something that I like to think Twitter is about to change.

Unknowingly, John Berman and JuJu Chang contributed to just that idea with their piece on Good Morning America that morning. As they were explaining Twitter, JuJu exclaimed “I’m tweeting the color of John’s shoes right now. Sure enough, she did (a later photo on Twitpic confirmed the shoe color). And for his part, as John explained Twitter, his name, @abcdude, was displayed on the screen. I immediately followed him of course, and was surprised to note he had less than 300 followers (that number has since jumped to 680). I decided to try communicating with him and sent him a tweet that said, “Great piece on Twitter, well done! Though I’m remiss that you didn’t talk about Twitter’s great business uses.” He quickly responded: 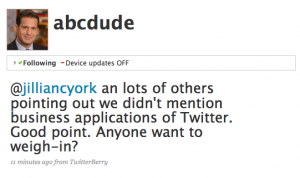 That, in my opinion, is what makes Twitter so great. Every day I am able to converse with a diverse group of people from all over the world whom I would otherwise not have had the pleasure of speaking with – not even through Facebook (how would I have found them?) or other social media. And the fact that some of those people are celebrities, journalists, and writers who otherwise may never have spoken to me is the icing on the cake.

There are, of course, celebrities who don’t quite get Twitter, just like there are regular folks who don’t get it, and it can be frustrating when it seems that someone is having a monologue, rather than a dialogue. But for every @ShialaBeouf, there’s an @MCHammer or a Talib Kweli (@RealTalibKweli) using Twitter as its meant to be used – as a tool for communication.

(Note to readers: I plan to add my thoughts on how Twitter should move forward, as well as a bit of analysis on Twitter Search and why I think it’s failing its users…soon to come)