This is disturbing. Rapper 50 Cent spent some time in Morocco, that much I was aware of.  And then this photo (below) surfaced, leading me to have perhaps an ounce of respect for the man – he’s clearly lunching in an average Moroccan home (if the Sidi Ali didn’t tip you off, I don’t know what would). 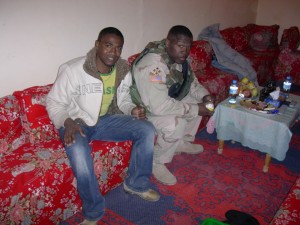 But then he has to go and say ignorant shit like this:

Some of my experiences while filming in Morocco really stuck with me. When you think of Morocco, you think of belly dancers and s**t, but it wasn’t anything like that. The area we were in was war-torn. I took a lot of photos, and I ended up giving them to the (video game) developers

Really, fiddy? You think of belly dancers when you think of Morocco? Okay, I suppose that on the ignorance scale, that’s only about a five, but what’s up with Morocco as “war-torn?” I mean, aside from the Western Sahara (and I highly, highly doubt they’d let 50 Cent film a movie there), the last war in Morocco was in the ’60s, and there are certainly no blatantly war-torn areas of the country!

Perhaps it was a war set left over from Black Hawk Down and 50 was just too stupid to realize it?

War-torn? Do you know where he’s been?

I think perhaps the phrase “war torn” is like a figure of speech.

Perhaps the expression “poverty riddled” is more of the meaning he mean’t.

When you travel Morocco extensively and see families living in one room shacks and unfinished buildings everywhere, perhaps 50c, being an average Joe blog, is not far wrong.

I’ve seen plenty of poverty in Morocco. Even Sidi Moumen could look a bit “war-torn” I suppose, but it bothers me that that’s the image of Morocco 50 Cent is out there propagating.

“War-torn” in the US, incidentally, has never really been used as a figure of speech.

ROFL @ “Perhaps it was a war set left over from Black Hawk Down and 50 was just too stupid to realize it?”

I agree that sidi moumen doesn’t look war torn and I highly doubt 50 cent was anywhere near side moumen. I doubt he was even in Casablanca.

His entourage didn’t teach him manners either…he has his shoes on in a Moroccan house lol.

Haha, didn’t even notice the shoes!

Please also note the prominent placement of a box of “kleenex.” Very realistic!

I am sorry but this is silly, 50 Cents is sooo stttuppid , the war torn area he was in was the freaking set for the film he was shooting in. what a stupid , now this gives you a raw image of how intelligence a typical american would have . my email johnnybravo20us@yahoo.com. stupid just stupid. i am an actor my self .

hehhehehe thats for sure. ” the area we were in , was war torn” its the set.I mean Its beyond stupidity. he doesnt need that title heheh. are you american jill

I am American, but that’s not the point.

Yes, it is beyond stupidity, and I highly doubt that he was only referring to the set. Whatever he saw, he made an assumption about it. Not surprising at all.

50 Cent was in “Ouarzazate” and the movie Black Hawk Down was filmed in “Salé”.
As a moroccan man, I think Curtis “50 Cent” Jackson was damn right by callin’ this town war-torn because it is war torn and neglected by the nature. So let’s face it 50 Cent is far from being stupid and ignorant.
WATCH YOUR WORDS Sarah & Ben

Hes also making a videogame where he and his friends go to Iraq and kill terrorists.

That I was in Morocco is not surprised

I love 50 cents hip hop and am sure that he is certainly one of the best music artists in this business. Anyhow, thanks for writing this news.

Ok guys..
Thise picture its relley freak me out…i mean come ooon! how 50 cent in morocco with War-Torn ? lol that realley semes like carzy to me..

Morocco is a very beatiful country… but where was 50 it’s just a film city with movie studios…
I recommend you to come and see Marrakech, Agadir, Tanger, Casablanca, Rabat… Morocco is surely not like the US but it has its own charm and believe me you can find belly dancers and shit anywhere in my lovely country!!
(y-assineg-unit@hotmail.com)

Oh my God, Yesterday’s concert was like SOO SIIICK !! :o :D But in the end, he screwed up when he said quickly ” Yo, Morocco, you’re the best, thanks for having me” And then……. He disappeared ! Everybody thought that he was going to come back and say LOL, that’s a joke or whatever but HE JUST Didn’t ! :( The way he left kinda SUCK ! AND please, one more thing, Morocco is a wonderful country, and the fact that he said that it was “WAR-TORN” proved that he’s definitely stupid, because That’s NOT Morocco.
Maybe he just didn’t see enough… :/

I hope that he didn’t scare the poor kids with that face of his.
Morocco is definitely better than a hood where he grow up.

Why will anyone care what a thug think of our country. He is nothing but
An idiot .
What he thinks of morocco will not change thing

I think that he spoke of the village where he was shoting the movie, maybe it’s deserted, that’s why he said so(me personally I have never been to the theire, but looking at the picture were he is sitting in the livingroom, it’s true it’s not a posh area.

Hey, I’m from Morocco and that area is not War-torn as you stated.
My job here is done.