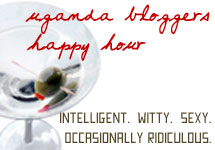 When you’re just dropping into a country, whether as a tourist or for work, it’s often difficult to get a sense of local realities and even more difficult to get to know locals. That’s why, in the city of Kampala, Uganda, I’m feeling incredibly lucky to have been invited to the local bloggers’ meetup thanks to my travel partner Rebekah Heacock, who used to live here and was present at the very first Ugandan Bloggers’ Happy Hour back in 2007.

I didn’t know what to expect; I take part in a bloggers’ meetup in San Francisco called Iron Blogger which is usually more like a happy hour itself, and have dropped in on blogger meetups or tweetups in a few other countries, but each is typically quite unique.

As it turns out, Ugandan bloggers come in most similar to San Franciscans: a casual meetup where the topics discussed range from the TV show Girls to the local vintage fashion scene to circumcision. Compare that to some of the topics discussed at Iron Blogger (a colleague’s lack of eye contact, the best place to find Belgian beer in the Mission, the San Francisco polyamory scene).

After joking about Girls (everyone’s favorite quote was Hannah’s query about “the stuff that gets up around the sides of condoms“), the conversation turned to circumcision. Someone had commented upon a billboard in downtown Kampala–probably sponsored by USAID or Pepfar–that features a smiling woman and a caption reading “I am proud I have a circumcised husband because we have less chances of getting HIV.” 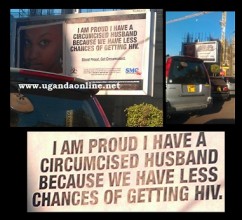 This billboard sparked a hot debate over whether that’s an accurate assertion (there are conflicting studies), as well as whether it’s a good idea at all to promote circumcision for HIV prevention (in that it might prevent condom usage). Then the discussion went a different route entirely, as folks began debating whether circumcision served any purpose at all. The frustration from most (particularly the one mama present with her child) was that the U.S. is so heavily promoting medical circumcision, which many believe not to be necessary…most folks did accept traditional, religiously justified circumcision though, in contrast to the current debate in Germany.

I’m not well-informed enough to have serious input to this discussion, though I’ll share where I stand: I see these advertisements as incredibly problematic in that they seem to promote circumcision as a stand-alone prevention technique for HIV. Furthermore, the research on whether circumcision does indeed lower HIV transmission rates is hotly debated: are we promoting something that could potentially decrease sexual enjoyment for negligible results? Shouldn’t we focus instead on other safer sex strategies like condom use?

Anyway…It was a fascinating conversation of several to be a part of and I’m grateful for the Kampala blogger community to welcome me with such open arms. I wish I had photos to share, but the ones Rebekah and I took came out very blurry, thanks to the low lighting of Mateo’s bar.

Hope to see you again, UBHH!

So true – quite misleading and I am afraid this could spark off a whole new resurgence of HIV to un-controlled levels. The recent disappointing rates of HIV prevalence seem to have triggered off the government’s panic buttons to endorse such messages even with the still hotly debatable conclusions on whether circumcision really helps. Serious reviews needed and urgently before the public blows it out of proportion. I am worried; sounds like a time bomb being set up!