Editor’s note: After many years, I still get comments on this post asking for advice. My new project, Onlinecensorship.org, offers information on how to appeal Facebook and other companies’ decisions, check it out.

Remember those days when users whose Facebook accounts had been disabled would receive a message stating that the decision could not be appealed? And then the user would have to e-mail Facebook in an attempt to explain their situation and in hopes that they might be the exception? I certainly do. I recall, last spring, being at a conference where a Facebook employee was actually present and receiving an e-mail from a small town journalist who, despite using a very ‘vanilla’ name, had found his account disabled, accused of using a pseudonym (he wasn’t), and pinging Facebook to ask for help on his behalf because his own attempts had failed. In the end, the journalist got his account back, but not until he’d exhausted several processes.

I’m thrilled to say that those days are no longer. 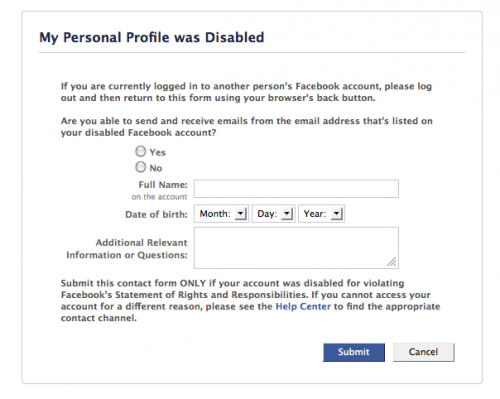 Recently, Facebook rolled out an easy-to-use appeals process, available via their help center for any user whose account has been disabled for a ToS violation. Though I can think of a number of improvements that could be made to the form itself (for example, why is there no space for one’s profile URL or e-mail address? If a user can’t get into his account, and his name’s Michael Smith, how is Facebook going to identify him amongst his thousands of counterparts?), I’m glad that Facebook has listened to users and instituted a process by which they can appeal to get their accounts back.

I’ve also heard from a few users that Facebook is issuing warnings for things that previously might have gotten them kicked off the platform (such as “spamming,” which Facebook still unfortunately seems to define at times by adding too many new friends at once – my own father once found his account locked for that odd violation). This is also good news, and I hope that in the future, breaking the rules (at least certain rules, anyway) will no longer result in account deactivation at all.

Facebook does not provide enough support options to the users. I faced a case scenario recently where we had a page for a brand left with an admin ID that we didn’t have access to. I then found out that there is no way one can claim the ownership of that page.

[…] in July 2011 Facebook introduced a new appeals process.  Jillian C. York’s Facebook Appeals: We Haz Them has more.  Give it a try, and let us know how it […]

This is true there are not enough support for the users to use. There are lots of spams and you receive links that you do not like or asked for. And there are constant constructions on the site recently that your messages has been erased or the chat box is acting funny. But overall I think that facebook needs a lot more options for the users and privacy control as well.

In March the National Front Facebook Page went unpublished and has remained so even thought an appeal has been lodged.
The two items that offended someone were on drugs and congratulations to the Golden Dawn Party over keeping their seats in Parliament in the Greek elections.
The National Front is a legal political party under New Zealand law
Someone somewhere does not like freedom of speech or thought.

My account is not disabled I have been banned by Facebook for 30 day again for a photo of a Australian politician Tony Abbott wearing a Nazi uniform have posted this and many other people have in past with no problems this photo was posted earlier in the year and it was reported then by some one I did not see it violated Facebook rules so left it when it was reviewed Facebook did not think any thing wrong with it and I can’t remember when I posted it it was a long time back so why know is it deemed offensive and give ban and there was no notification on this one why can I appeal this ban? How? where? anything send to FB they don’t seem to get back any help would be appreciated. Thank you.

The appeals link just goes to a generic help center.
My account wasn’t closed, I just can’t comment on anything.
Seems it’s just one person making this asinine decision to block activity by users.
At the least, Facebook needs teams of at least three employees to review questionable content. I’m not talking about blatant rule violations but ones where two people have a different idea of a community standards issue.

Yes my account got block because I posted an firearm and didn’t know I couldnt. This my first time in 7 or 8 years getting this done too me. I’m very sorry. Know I understand the rules for Facebook posting. This will never happen again.

[…] moderation choices had been ultimate and may just now not be appealed. Then, in 2011, Facebook instituted a process wherein customers whose accounts were suspended may just observe to regain get entry to. That […]

[…] It was only in 2011, after years of advocacy from human rights organizations, that your company added a mechanism to appeal account deactivations, and only in 2018 that Facebook initiated a process for […]