This morning, not an hour after tweeting my excitement, I received a surprise in my inbox: an invite to Google+. Though the timing was sheer coincidence (no, Google is not reading my tweets, or my mind…yet), the semi-instant gratification was pleasing.

After a quick login (including a checkbox giving Google+ permission to access your Picasa photos), I was in and exploring. The first thing I noticed was Circles, friend classifications Diaspora-like in their simplicity. All in the image below are standard, save for “Professional Connections” on the far right.

In order to add friends to your network (and, in fact, to discover whether they’re on the site yet at all), you must add them to one of your circles.

Shortly after logging in, I received notification that my friend Gilad had added me to his circle. I added him back and we gave the site’s “hangouts” a test run. A hangout is a chat room of sorts for up to ten people that uses video and text. Aside from giving my MacBook a hernia (seriously, I thought the thing was going to take off, it was so loud), the “hangout” was pretty cool: 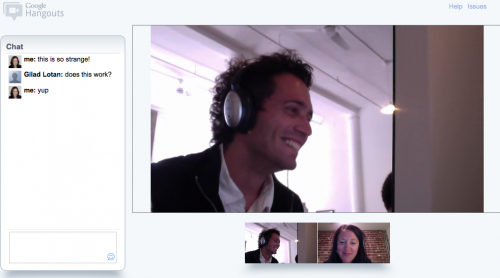 One thing Gilad noticed was that the community policing mechanism. If you hover over a user’s image while in the hangout, you’ll see a red hand. Click on it, and you’re given the abuse reporting mechanism: 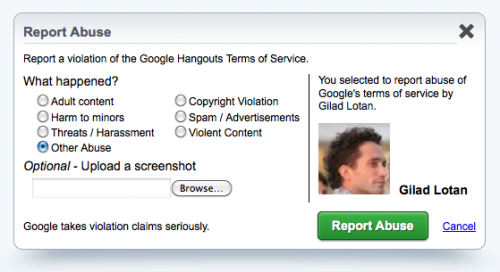 While I absolutely love the fact that you can upload a screenshot (thus providing actual evidence of abuse, rather than hearsay that could potentially kick someone off the system), I’m a bit confused about the options. Are hangouts really a place you’ll chat with people you don’t know? I suppose a friend could invite me and 8 others I’ve never met, and that one of those individuals could do something lewd, but nonetheless…it seems a bit odd for a social network of this type. I also wonder if Google+ will have its own, socially-oriented TOS, or if it will rely on Google’s overbroad TOS.

And no, I didn’t report Gilad.

Another feature of the site is the “Stream” (wonder what Al Jazeera will think of that name): essentially, your status update. What’s cool about it is how easy it is to send status updates to a particular group: 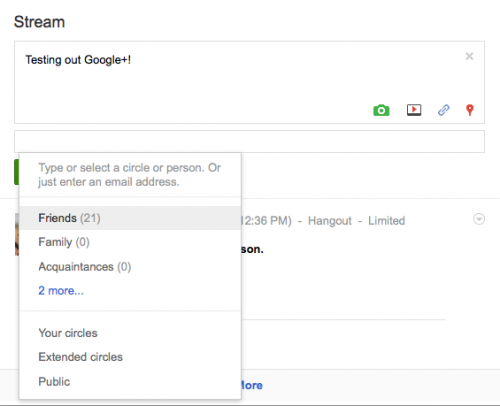 That’s a feature I really appreciate; what’s always bothered me about Facebook is the fact that I find it very difficult to manipulate my different “groups.” For example, I once tried blocking a person from viewing individual photo albums, but found that she wasn’t able to see any of the albums. Not very effective.

So far, Google+ appears to have incorporated the best features of other social networking sites into one. I’m not sure that I’d ever be convinced to start using Picasa or the Google+ photos feature regularly (I only use Facebook for snapshots, for example, while Flickr is mainly for travel photos), and I’m not convinced that my fairly new MacBook Pro can handle the hangout without exploding, but aside from that, I’m pretty impressed so far. Now, if only Google would send invites to the rest of my friends!

I dont want to duplicate all my effort of Facebook contacts and content. Ill probably only really ‘buy into’ Google+ when full Facebook integration is there.

Did you happen to request an invite at some point? If so, where abouts would I do the same?

When invites are enacted will you send me one? – I’d love it!

If I have plenty, I certainly will.

No invites for users yet – this is apparently just a test run.

That makes sense. Personally, I’ve been waiting for a reason to leave Facebook – I don’t like their Terms of Service and privacy policy, and the site isn’t fully encrypted (e.g., SSL breaks on certain third-party apps). But I won’t leave until most of my friends can be found at Google+ or wherever we all end up.

[…] This article was originally published on Jillian York’s blog […]

Can anyone send me a Google+ invite