Facebook has long claimed that their community policing system cannot be gamed, and that pages are not automatically removed for TOS violations, despite evidence to the contrary. Today, more evidence, as famed critic and blogger Roger Ebert’s Facebook Page is removed, allegedly for being “hateful, threatening, or obscene.” 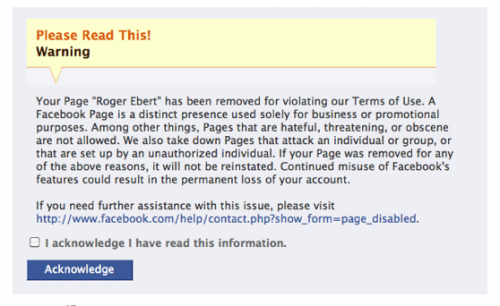 As Ebert writes, he was recently the subject of controversy after admonishing recently deceased Ryan Dunn for driving drunk. Though Ebert states he did not post to his Facebook wall about the controversy, he believes he was targeted by angry fans of Dunn’s program Jackass.

As I’ve written before, I firmly believe that, at a certain number of reports, Facebook’s systems “tip” in favor of the reporting, bringing down a Page or profile. While the company has denied that, I can’t possibly come up with any alternative explanation for why Ebert’s page–or Sarah Palin’s page before it–would be removed.

Note: Once again, Facebook states that the Page was removed “in error.” But why? What triggered that error? Utter incompetence or automated systems?

think that “WE” need to have competitors to all of the Big Co silos like FB and Twitter . Until there is viable competition members feel they have no choice if the disagree with the Big Co. In my view these competitors should be owned fully or partially owned by the “Public”. In a way these applications would be “Public Utilities” who’s primary goal would be to provide services in the “intrest” of the public.
We have been working on bringing this concept into reality and will have some announcements shortly. We also have been working on several applications that have the possibility of becoming “Public Utilities” The Social network is in alpha here http://social.maia68.com. There are some bugs we are trying to fix them as fast as we can.
We are also working on somethings here http://www.maia68.com and here http://www.kleemi.com

Automated systems are how corporate visions are (attempted to be) made manifest.

So the answer is both, with the humans behind the wheel driving the systems train while maintaining the illusion of control as they careen into the future like Mr. Toad’s Wild Ride.