I’ve been playing with Google+ for the past two days, and so far, I’m really enjoying it. I’ll be honest: There are features on Facebook that I currently still prefer, including the way my own Wall is displayed, as well as the way I look at photo albums. That said, I’ve been analyzing Google+’s rules, regulations, and guidelines to see how they stack up to Facebook’s”

Let’s start at an easy place: Naming. As I’ve written before, I find many aspects of Facebook’s “real name” policy troubling, but perhaps the most troubling of all is the fact that individuals whose profiles have been disabled or frozen due to reports that s/he is using a pseudonym have often had to submit government identification to prove that isn’t the case. I’ve also been frustrated with the fact that “known” pseudonyms (e.g., pen names, stage names) aren’t allowed.

With that in mind, I can also say I’ve been doing a lot of thinking about the utility of pseudonymity over the past few months and, particularly in light of the events across the Arab world, remain less convinced than before that it’s what activists really need, or more importantly, want. Egyptian friends in particular highlight the use of real names (full or partial) as part of their online success. (Note: Of course this doesn’t change my view on anonymity as a legal choice.)

Google+ gets it right, marketing itself as a service for which identity is important. It does not require users to use their full legal name on the site (as Facebook does), nor would it remove the profile of an individual using a known pen name (such as Facebook did with Michael Anti). Rather, users are encouraged to “use the name that you commonly go by in daily life.”

There’s no indication that users will have to submit government ID on Google+ to prove their identity, but Google does suggest that users accused of impersonation may be required to do so. Unfortunately, as with Facebook, Google suggests it will ask for ID via e-mail.

For a long time, Facebook users had to suffer with only a legalese version of the lengthy TOS, and one that was only available in a few languages to boot. Not anymore: Earlier this year, Facebook rolled out its community standards, a document to help users understand the rules. Unsurprisingly, Google+ has also come out with a set of community standards; more surprisingly, they’re incredibly similar to Facebook’s own.

Both sets of standards cover the following topics: nudity and sexual material (neither allow it), hate speech (it’s forbidden), copyright/intellectual property (both will respond to DMCA complaints), and phishing & spam (bad). Facebook also offers guidelines on theft vandalism, and fraud; bullying and harassment; the promotion of self-harm; graphic violence; and threats to others. In a way, these additional guidelines make sense: Facebook promotes itself as a tool for young people, allowing children as young as 13 on the service. And with all of its gaming features, that makes sense. Facebook also includes, of course, a guideline on identity.

Google+ so far seems geared toward an older crowd; that said, it does include an additional guideline on illegal activities, and its section on private and confidential information (don’t share what’s not yours) is worded more strongly (and is more specific) than Facebook’s on the same.

I admit, I do prefer Google+’s standards on sight. They’re worded clearly and offer more flexibility on interpretation. For example, Facebook’s guideline on bullying and harassment states that “contacting strangers or people you’ve never met in person can be a form of harassment.” This often results in users who contact or add too many other users “too quickly” (something activists certainly do) having their accounts frozen.

That said, I’m not sure yet how Google+ will interpret and enforce the rules. For example, does no nudity mean no images of breastfeeding (like on Facebook)? I somehow doubt it. Will the community policing measures ever result in automated takedowns? Will there be a warning system, and a strong appeals system? With the service so new, it remains to be seen.

Kudos to both: Google+’s community standards are available in 39 languages; Facebook’s are translated to 30.

Both services employ community policing and rely on user reports to locate and identify content in violation of their TOS. As I’ve said, it’s too early to judge how Google+ will enforce their TOS, but I will say that their process is simpler. 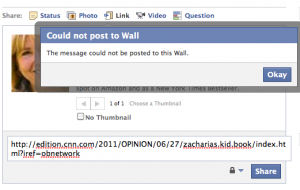 Whereas on Facebook, one can report any individual piece of content, it appears that Google+ only offers the ability to report a profile (correction: Google also allows you to report content). This is both good and problematic: Whereas the ability to report content can result in that content–rather than the person’s profile–being removed, it also allows for a lot of petty nonsense. For example, if a link is repeatedly reported as offensive on Facebook, it seems that that others are automatically prevented from posting that same link, at least for a time. Unfortunately, this happens to me constantly; often the content is related to politics (especially, for some reason, Palestine), but sometimes it’s something objectively innocuous, such as this CNN report.

The choices given for reporting are a bit different too:

Overall, the two services provide similar community standards, for better or worse. What may be different is how they’re enforced, and to what degree they’re necessary, given each service’s core user base, as well as the disparate privacy settings on the two platforms.

22 replies on “Community Standards: A Comparison of Facebook vs. Google+”

I’ve been exploring and comparing too, and so far have only added 4 people. One of those reciprocated, the message took that into account indicating an encouraging granularity of logic in this particular algorithm. What I have not yet determined, is where I might stand if someone I am OK with as a friend on Facebook or as an email contact adds me. Hoping there is a harmless option that only restricts Google+ interaction.

[…] York provides a comparison of community standards between Google+ and […]

One thing you forgot to mention is the fact Google requests users to provide Cell Phone numbers for user verification which could have more of an impact in the region where almost all cell phones must be registered to a valid country ID card or foreign passport.

That’s a good point, Ahmad, though as you say, it’s only a suggestion. Incidentally, Facebook offers the same thing.

Definitely worth thinking more about the impact on users in countries where cells must be registered though, thanks for that!

[…] Community Standards: A Comparison of Facebook vs. Google+ Interesting discussion of the differences in the approaches Facebook and Google are taking to community self-management. Personally I find the Google approach much easier to explain to others already. (tags: GooglePlus Google Facebook Privacy) […]

Google has utterly failed at every attempt it has ever made at customer service. This suggests any appeal procedure will be utterly, utterly dismal.

[…] Here I give you two cool articles about this issue: one for Polish speakers and one for English […]

Jillian, have you noticed that your Google+ profile is always public (accessible to the entire web). You have the option to make it not show up on searches. But it is still public. AFAIK, this is not the case with Facebook.

Yes, I already selected my settings.

You’re right – Facebook is not default public, though the default settings do mean that your profile shows up in search and that some of your content is available to strangers (in FB’s case, friends of friends).

[…] my last post, I noted the differences and similarities between the user policies of Google+ and Facebook. One of […]

One thing, google+ doesn’t understand that my web address http://www.c-art.com *IS* valid but they won’t let me enter it because they understand it to be INvalid. So I’m pissed. Stupid mistake on Google’s part. Surprising.

Regarding identitification: Google seems to be abolishing its tolerance of pseudonyms these days. They locked profiles urging people to change their names to something.
See https://plus.google.com/109859000123225450719/posts/bc1R96f9W2d and http://www.thinq.co.uk/2011/7/8/google-starts-account-cull-google/ (also http://dwellonit.taterunino.net/2011/07/08/google-seemingly-split-on-pseudonymous-google-accounts-and-google-profiles-its-okay-until-it-isnt/ and http://www.flickr.com/photos/opensourceobscure/5915226844/) for two recent examples of Google’s new interpretation of its community standards.
I’m deeply concerned about the direction this is heading.

Funny thing, some websites are made only to make fun of the battle between Facebook and Google+, like this one here http://facebook-vs-google.net

this is a great comparison of the community standards. I posted one of the thousands of reviews of the usability, I’ll link to yours if OK.

You’ve chose a very interesting topic for discussion :) I thing, people can use both networks, but each of them for different needs. As for me, all I need and want I have in Facebook, so my choice is evident. I’ve also made a research and expressed my opinion here: http://templates.motocms.com/blog/showcases/google-wont-kill-facebook/ I’ll be really glad to see your comments :)

Interestingly Google doesn’t seem to use that information for verification purposes. When I created my Google+ account I thought that my cell phone number was none of their business. They probably already have it anyway, but I used a very simple fake number instead. And they let me in. Let’s hope they don’t start checkin’.

At first I saw Google+ as a “me too” type product but it’s starting to grow on me.

I find both social networks different enough in style and in the people I wound up following so different it is difficult to compare. Both have their strengths and weaknesses in facilitating socialization.

Thanks for the comparison. It is funny to see Google playing catch up while they are used to being the ones leading the curve. Google+ is something that most of us signed up for because it was there, but unless Facebook makes some serious mistakes, it will retain its market leading position. Facebook found just the right balance and its users are happy, even as it keeps changing.

The only reason for a lack of +1 button is my own ineptitude…I don’t run my own website :)

[…] Here I give you two cool articles about this issue: one for Polish natives and one for English […]