Marcelo Vieira is a Brazilian footballer who, according to various reports (including this one from YNet, in Hebrew), posted support for Palestinians on the anniversary of the Nakba. 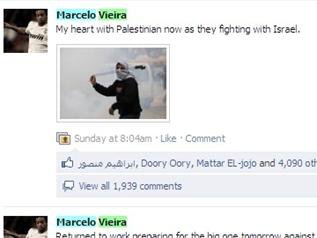 According to multiple reports, the page on which Vieira made the statement was taken down shortly after. Now, there are plenty of conspiracies circulating as to why, and it’s prudent to share that a rather large contingent of people–some of whom I count as friends–firmly believe that Facebook holds a bias against Arabs and Muslims. It is also fact that I have tracked a large number of takedowns of content related to those two topics, and in particular, Palestine. It is also–oddly enough–fact that at one point Facebook blocked users from using the term “Palestinian” when creating pages (it was, apparently, a bug).

That said, I don’t believe that Facebook holds a systemic bias toward Arabs, Muslims, or Palestinians. Rather, I think the problem is much worse: I think Facebook is utterly inept at policing content on its site.

Facebook has, as I’ve previously written, long stated that it doesn’t automate removal of content. And yet, numerous cases suggest otherwise. When groups (that I’m intentionally not naming) band together to target specific content on the site for removal, by flagging it as a TOS violation, nine times out of ten, it goes down quickly. When content on Sarah Palin’s Page was removed, Facebook blamed it on a “bug.” Same when the Boycott BP group went down. And amid the dozens of cases I’ve tracked are several where I’m pretty sure the only reason content was removed was because Facebook staffers lacked the Arabic expertise to understand what was written.

In this case, particularly given the attention Vieira’s comment received (it was highlighted in YNet and before being removed had nearly 2,000 comments), I’m guessing that someone–or a group of someones–decided that Vieira should be targeted. And because Facebook has no solid appeals system (users whose content is removed are often told the decision is final), or because the Page was maintained by someone other than Vieira who didn’t know what to do, the Page went down and has not been reinstated.

and the facebook page organizing the saudi women drive-in on june 17th? where did that go .. and why ..