In Turkey and in Thailand, and perhaps elsewhere, there are a few YouTube videos you can’t see; videos in violation of local laws–in Turkey, insulting Ataturk, and in Thailand, lèse majesté. Though both governments filter their fair share of websites (and now, Turkey blocks YouTube as well), in this case, the filtering is not coming from governments, but from YouTube which, rather than risk being blocked entirely by the local government, chooses to geolocationally filter offending videos for the local populace. In 2008, the New York Times explained a bit of the process in Turkey:

Wong decided that Google, by using a technique called I.P. blocking, would prevent access to videos that clearly violated Turkish law, but only in Turkey. For a time, her solution seemed to satisfy the Turkish judges, who restored YouTube access.

This morning, reports have emerged from Israel suggesting that the same is happening there. A video, released yesterday and entitled “Video Killed Israeli PR”, has been reported inaccessible by Israelis all morning:

A closer look determines that the video, which parodies Israel’s public relations, is perfectly accessible in the United States, and elsewhere…except in Israel. Ali Abunimah, who caught the story early on, writes:

After receiving an initial report that the video could not be viewed in Israel, I asked a contact there to check and he replied that when he attempted to view it on YouTube: “This video is not available in your country due to terms of use violation.” The screenshot below sent by http://twitter.com/AbuKedem shows what happens when someone in Israel tries to view the video: 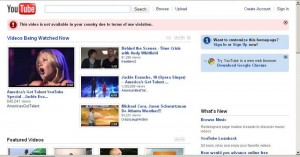 Though no word from YouTube just yet (a few folks have sent out e-mails), it seems very likely that YouTube has blocked the video within Israel at the request of the Israeli government. It is unclear whether or not the video violates local laws.

It’s blocked in France now, too.

Strange! Thanks for letting me know. I wonder if my suspicion is wrong…

It seems the video has also been blocked in France, according to the same source.
For those who still want to see it within “blocked” territories, it is available on Vimeo
Way to make this video even more viral Israel :)

why the hell is it blocked in FRANCE?? Does anyone know?

Glad we don’t have that kind of issues in Tunisia.. The whole YouTube is blocked !

it’s available on dailymotion. i confirm my collegue in france can’t access the video in france same excuse is given.

thanks god we have everything uncensored in Morocco!!

YouTube blocks it in France currently. The reason? “Cette vidéo n’est pas disponible dans votre pays en raison du non-respect des conditions d’utilisation”.
If you switch to English, YouTube will tell you the same – more or less: “This video is not available in your country due to terms of use violation.”
On DailyMotion, however, the clip is available to viewers from within France.

Yep — and wait another couple hours and YouTube will block it for the same reason in the U.S.

It works in Area A in the West Bank..

It is blocked in Germany, too

So it looks like it’s been blocked in the EU as well.

It might be a total conjecture on my part, but I suspect the video has been deemed anti-semitic. Which would make it offensive for viewers in Israel and the European union.

Remember that the EU’s Agency for Fundamental Rights ‘working definition’ of antisemitism includes holding Israel to higher moral standards (whatever the hell that means) that other states:

Again, this is just speculation, I could be wrong.

It´s not blocked in the whole EU. With a dutch or an english IP (vpn) I´m able to watch it on youtube.

Here is non-you tube version of the “Internet Killed Israeli PR” which sources believe will not be blocked in Israel and other places:

Censored in Poland too

It’s working in UK and I translated this post in my Persian blog :)

yes, blocked in Germany as well

It seems that the video is no longer blocked in France, as I managed to open it from the above link provided by Ms. York, whose efforts are highly appreciated.

Thanks for letting me know – that’s surprising – are you on PalTel?