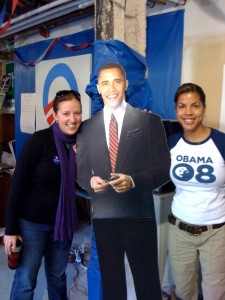 This is what we did today.  In my home state.  I wish I could say that we were super-effective, but the truth is, out of 45 houses, we maybe secured an Obama vote from one person.  But that’s huge, given the multitude of people doing what we did for just a few hours, every single weekend.  Despite the past two elections, my stubborn inner optimist still believes in the democratic process.  The stubborn little kid inside of me still wants to fight for what’s right.  I know I sound naive, and I know I don’t agree 100% with Obama’s stance on a couple of issues, but I still believe he stands for what’s right.  And that this election matters more than any I’ve had the chance to vote in before.

New blog post: :
This is what we did today.

I was about to commend you, Jillian, for being a rockstar but then I realized that’s not REALLY Barack Obama. But then again, you’re trying to make the world a better place so you really are a rockstar.

Yeah, I can only dream of being that much of a rockstar! But thank you anyway, honestly.

Cool! Good for you for doing something that’s important to you. :-)

All the power to you baby!