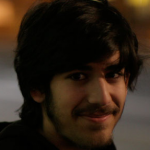 Last night I stayed up too late, drawn into conversation by the right energy and the right amount of wine, with my roommate in Amsterdam where I’m currently attending THNK.  I knew that, today (Saturday), I would have to present a project I’ve been thinking about, and I was feeling unprepared.  The project, roughly, is something I’m passionate about: Ensuring that digital natives (or under-30s if you will) fighting for digital rights are well-supported.  Later I’ll tell you what that means.

But then this morning something happened: I woke up to news—all over Twitter and in my inboxes—that Aaron Swartz, someone I’ve admired for quite some time but could only consider as an acquaintance, had taken his own life.  His is not my story to tell, but for those of you who didn’t know him, I encourage you to read these important, heartbreaking eulogies from Larry Lessig, Cory Doctorow, Ethan Zuckerman, Cyrus Farivar, and Quinn Norton (in addition to the afore-linked by my colleague Peter Eckersley).

But on the other hand, Aaron’s story is not all that different from mine.  We were both, in many ways, nurtured at young ages and early stages of our careers (he much earlier than I) by the greybeards and leaders of our disparate community.  We are/were both people who spent a lot of time in our heads, who prefer to read than listen.  We are/were both passionate about and fought for the same cause, though I will consider myself accomplished only when I have managed to do half of what he did in his all too short life.  And, in some ways, we are/were both unprepared for the challenges, the nastiness, the terror that comes with fighting for unpopular causes.

One of my favorite quotes, from Salman Rushdie’s The Ground Beneath Her Feet, is as follows:

“My mother was a disappointed altruist, an angry woman who had come down to earth expecting a better place, who had landed in the lap of luxury and never recovered from the disillusioning discovery that dismal suffering, not easeful joy, was the human norm.”

In reading about Aaron today from our mutual friends who loved him, I suspect the quote would’ve resonated.  And like Aaron, I often feel madly frustrated and overburdened by the massive amount of ever-increasing injustice that seems to exist in this world.  But, and I am so ashamed of this, like many others have pointed out, our community did not do enough for him and we are also responsible.  Ethan says it best:

I am one of those people, and I can tell you another reason: Like with WikiLeaks and Bradley Manning, some of us failed to stand up out of fear or a misplaced sense of priority.  I realized this evening in talking to a dear friend that, while I’ve somehow never felt scared expressing my (by US standards, “extreme”) views on Palestine, I am somehow, sometimes intimidated to speak out about issues that hit closer to home.  And I don’t know why.  But I do know that I’m going to fight that demon and fight those battles more than I have been.

So tonight, when I gave my presentation, I dedicated it to Aaron.  In Cory’s piece, there are the following sentences:

Aaron had powerful, deeply felt ideals, but he was also always an impressionable young man, someone who often found himself moved by new passions. He always seemed somehow in search of mentors, and none of those mentors ever seemed to match the impossible standards he held them (and himself) to.

I don’t know how Aaron felt, and I can’t attempt to.  But I do know that this is a problem, and one that I’m passionate about wanting to find a solution for.  There are so many young people, natives to this crazy Internet who understand it much better than even us semi-young’uns do, and some of them are really struggling.  One person of growing prominence emailed me not long ago sharing feelings of depression.  I didn’t really know what to do or say, and I’m not even sure I did my best.  I will now.

One thing is abundantly clear: This was a young man whose impact on our community is something I’m only beginning to understand.  It is lasting.  It is deep.  And it is inspiring.  I am sad that I didn’t get to know him better: We met, a few times, and I talked to him on the phone last summer after my hit piece on Avaaz (where he had just quit) went viral, but I don’t think I ever gave him enough credit.  I do hope that in formulating and fleshing out this idea I’m working on, I’ll be able to somehow honor him.

To Aaron’s friends, family, and to our community at large: I am so deeply, deeply sorry for your (our) great loss.

Post-script: I just went back and read bits of Aaron’s blog, and in this piece, connected to the time Ethan mentions in his post, Aaron wrote the following, which gave me chills:

DFW’s suicide hit me very hard. I ended up coping by reading every piece of nonfiction he’d ever published. He was a brilliant, tortured man and I see so much of myself in him. His nonfiction was fantastic and I will consider my life a success if I can do half of what he did.

5 replies on “On Aaron Swartz”

Your notion of making sure that Internet activists are well supported brought to mind the talks former Telecomix activist Stephan Urbach has been giving for a while now. He came forward some time ago with a blog post about his depression and suicidal thoughts incurred in part from the exhausting work of supporting activists in Egypt and Syria, and has been trying to educate the community since then. Here’s a talk from last year’s re:publica in English: http://12.re-publica.de//panel/dark-side-of-action/

(Also, great to see you’re in town! Let me know if you feel like meeting up while you’re in Amsterdam…).

[…] Jillian C. York ” On Aaron Swartz Last night I stayed up too late, drawn into conversation by the right energy and the right amount of wine, with my roommate in Amsterdam where I’m currently attending THNK. I knew that, today (Saturday), I would have to present a project I’ve been thinking about, and I was feeling unprepared. 00Share […]

[…] Jillian C. York ” On Aaron Swartz Last night I stayed up too late, drawn into conversation by the right energy and the right amount of wine, with my roommate in Amsterdam where I’m currently attending THNK. I knew that, today (Saturday), I would have to present a project I’ve been thinking about, and I was feeling unprepared. 00Share […]