In the New York Times, a piece that caught my eye–in a “an article about Clay Shirky making bread? Must be a slow news day” sort of way–has sparked an interesting conversation elsewhere and caused me to reflect a little on the idea of what Zeynep Tufekci calls “digital dualism” – the idea that online and offline worlds are somehow separate entities, one “virtual” and the other “real.”

In his Times piece, David Carr talks about having dinner with a group of people with whom he is more familiar with “as digital avatars than as people.” His host, the inimitable Clay Shirky, turns out to be an excellent baker of bread, which in turn causes Carr to observe that he wouldn’t have known that solely from social media. Carr gives a nod to Tufekci as well, suggesting that she would “point out that I never would have gotten around to eating that bread with those people unless I had had a digital connection to them,” as she has observed (as I have as well) that weak ties often lead to strong ones.

This is of no surprise to me: Even before I joined the hundreds-strong Global Voices community, ensuring me a place to crash in more than 120 countries, I was dabbling with online friendships, something I wrote about in 2009, where I concluded:

As Web 2.0 gives way to Web 3.0 and beyond, and as social media continues to grow, so will our conception of relationships and what makes them strong. And as we take our online friends to the “real world” and our offline friends to the Net, those lines will ever so slowly begin to blur for all of us.

Indeed, those lines have blurred even more for me in the nearly three years since. While back then my online/offline interactions were limited to local encounters and Global Voices summits, these days some of the people I hold most dear are people I knew first online and see regularly on my travels. There’s Katherine Maher, a mutual Twitter follow I first met in 2009 or 2010, but whom I now see nearly once a month because our careers have collided of late and who is one of my favorite people to drink and gossip with. There’s Nora Barrows-Friedman, whom I’d followed for years before moving to SF and becoming “real life” friends with. There are my blogging friends scattered throughout the Middle East and North Africa, people like Razan Ghazzawi, with whom I’ve shared a meal or a drink in at least four countries, or Alaa Abd El Fattah–we’ve now been to each other’s homes. There’s my fellow bloggers from Kabobfest–even though I haven’t written on the blog in years, I’ve grown closer to my fellow bloggers like Will Youmans, with whom I authored a forthcoming paper for the Journal of Communications and May Alhassen, whom I met in LA last year and with whom I am currently playing phone tag. 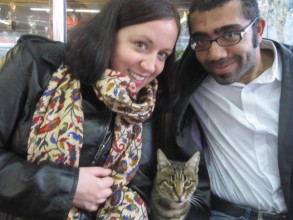 There are scores of others, the people whose blogs I read and Twitter feeds I follow and who I might run into at SXSW or in Stockholm in a couple of months. There’s even Zeynep herself: our friendship a testament to her theory; she took this photo in Istanbul of me and Ahmed Al Omran, with whom I traveled from Brazil to Turkey last November, a 30-hour transit period that gave us ample time to form strong ties (and after which I noted that there are few “real life” friends I could spend 30 straight hours with).

All of these examples serve to remind me that our world has changed. Another way our world has changed is our increased mobility and travel, leading us to meet people we might not otherwise have ever encountered. These two phenomena combined result in a new meaning of friendship, one that isn’t necessarily rooted in neighborly cup-of-sugar-sharing and Sunday chats around the table (or at the bar) but in trans-Atlantic opportunism, tracking of friends’ travel schedules on Google Calendar and TripIt, and always traveling with a few local items for your friends who miss this or that from home.

There is, however, one way in which I’m decidedly analogue: I still send postcards. The only difference is, half the people in my address list are people I met first online.

4 replies on “On Clay Shirky’s Bread and Digital Dualism”

In keeping with the online+offline combination theme of this post, I note that the ostensibly offline “photo in Istanbul of me and Ahmed Al Omran” also includes one of the owners of the Internet.