For the past year, I’ve written, incessantly perhaps, on the topic of account deactivation, particularly as it pertains to Facebook, the platform which could be considered the worst offender in this space, thanks to their “real name” policy.

Thanks to Doc Searls, I recently came across an example of account deactivation on Flickr; now, there have been previous shoutings of Flickr deletions–such as that of Maarten Dors, whose image of a child in Romania smoking a cigarette was taken down, along with the rest of his photos, back in 2007 (see comments below photo).  Dors successfully argued to Flickr that his photograph was meant to show poverty in Romania, and they reinstated his account; however, they were unable to restore all of the photographs (fortunately, Dors kept copies).  Flickr acknowledged their mistake, and offered to refund Dors’ Pro account fees.

There are two important points from Dors’ story that I want to reiterate before I move on: The first is that context is key.  Dors’ photo probably did violate Flickr’s terms as they were stated; as Flickr explained, no photos showing children under 18 smoking are allowed.  YouTube has similar policies, one of which resulted in the removal of a video that showed Tunisian children sniffing glue.  In both cases, however, the companies recognized that, in a certain context, showing such images is justifiable.

The second point is that Flickr is an American company.  In the comment thread of Dors’ photo, several people pointed out that Flickr, based in the United States, is subject to US laws and while a child smoking might not be illegal in Romania, or China, the legal age in the United States is 18.  Though I would agree that in context, Dors did nothing wrong, I can see how an employee at Flickr, charged with policing content, might see the image and find cause for its removal.

Of course, there’s a good solution for the context issue: Companies should provide for justification during the upload process; if a customer is aware that their content might under normal circumstances violate the company’s TOS, they should have a space to explain why they’re posting it regardless.  Exceptions are often made for art and activism; companies should allow for those arguments from the start. 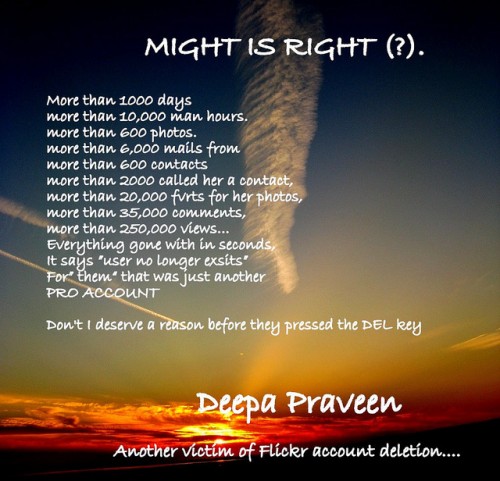 Deepa’s account of the story, from what I’ve read here and was alerted to on Doc Searls’ blog, is that Flickr deleted her account without warning or explanation.  I’ve contacted her for comment, and will update if I receive any.

Though it’s certainly possible that Flickr sent her a message after the deletion, I contend that that isn’t enough (and from everything I’ve read, it seems unlikely that she was sent prior warning).  Even Flickr admits that in some cases they don’t give prior warning.

I find this unacceptable.  Whereas with Facebook, one can argue that you’re not paying for a service, with Flickr, you often are.  Deepa Praveen was.  Maarten Dors was.  I would argue that, if I’m paying for a service, I deserve at least the opportunity to retrieve my photos before they’re deleted from Flickr’s database.  And while perhaps child pornography is an acceptable exception, “spam” is a pretty nebulous thing; Facebook often deletes accounts for “spam” when the user has simply added too many friends in one day (in fact, activists are frequently busted by Facebook for adding too many people in one day; usually, it’s because they’re trying to find local folks for some reason or another).  And the Flickr rep readily admits that child pornography, hacking, and spam are but three examples; what other examples might call for a deletion without warning?

Lastly, while I would like to point out that legally, Flickr hasn’t done anything wrong, their nebulous community guidelines make their pattern of account deletion incredibly problematic.  Flickr users are required by the community guidelines to “play nice” (ah yes, the ol’ “play nice”); “don’t upload content that is illegal or prohibited” (illegal or prohibited where? Saudi Arabia?  Can I not show a woman’s hair?); and “don’t bore the brains out of other members” (whereupon they admit that they might just delete your account if you do).

Flickr, as part of Yahoo!, is a member of the Global Network Initiative (full disclosure: I don’t work for the GNI, but my employer is a member, so technically, I’ve got a wee bit of bias here), so frankly, I’m a bit surprised that their terms continue to be so…well, vague.  They don’t comment on individual accounts, but I would really love to know why Deepa Praveen, a paid user of the service with over 600 photos and 35,000(!) photo comments, doesn’t deserve a public explanation.

Deepa never got an explanation or atleast an intimation from flickr! in Doc’s post someone from the company said they cannot say the reason in public as its against policies but they can tell the user if she contacts them for the same, unfortunately no reply yet.

As you mentioned flickr has all the right to remove an account if found offensive or against rules of law, no argument exist there. but when a person has 1000 pics and one of them is against their policies, whats the logic in deleting entire account? why can’t they remove the specific pic and warn the user? else if they are keen to remove the account why don’t they give a space to breath for the user? i am talking about a PRO user. If the PRO user does not have such a privilege why they are charging people? again the issue is the strategy than the outcome. cannot guess a positive reason for them to have such a destructive attitude, in the modern world all such incidents are discussed widely and information is passed quickly around the globe, and cannot blame people if they mark flickr as an unsafe method of showing pics as you may loose your account any moment

If you request for a reason after deletion then they should provide the specific reason other than saying you violated our terms and conditions/ community guidelines.

In December 2010 flickr deleted my account that was receiving 200,000 views per month. My history with them was not good. At the start of August 2009 flickr put a “not in public search areas” restriction on my account without any notice or even saying anything about it. Traffic dropped by 80% immediately. It took me until April of 2010 to realize what they had done. I asked for an account review and the restriction was removed. They said the restriction had been added due to concerns over voyeurism, but the reviewer opined that none of the images were voyeur material. I continued to add new material that was of the same style and character as had been there before. About a week before Christmas the account was marked “moderate” without warning and I received a misleading message that theere were concerns about nudity. As there were no images with nudity I asked for an account review. They immediately deleted the account and said that I had been warned about voyeurism. Yes, the opinion from flickr mods that there was no voyeur material is a warning.

flickr uses the dictionary definition of voyeurism, but when they apply it, they are making things up as they go along.

Jillian, when you remind us that Flickr/Yahoo is an American company, I wonder if there is a master directory of internet companies (or, social networking companies, if easier) matched to their geographic base. Wikipedia, etc., contain this — but not in one screen. Thoughts?

About 3 weeks ago my 2 years Pro-Account was deleted less than 2 months after I purchased it, as a renew of previous Pro Account. I didn’t receive any warning before the deletion, nor any explanation after.
Thus I sent a mail to Flickr-support and asked about it. Was answered that “someone sent an Abuse Report”, Flickr “deterrmined that my content and/or behavior was in violation” with the following rules:
“”Do upload content that you have created. Respect the copyright of others. This means don’t stealphotos or videos that other people have shared and pass themoff as your own.”

“Don’t upload anything that isn’t yours. This includes other people’s photographs and/or stuff thatyou’ve collected from around the internet. Accounts that consist primarily of such collections may be terminated.”

Now, as I never posted anything which wasn’t created by myself, 10 days ago I asked Flickr which of my posts was reported, as I could easily prove it was made by myself (my contents are mainly hand-made drawings and a few fotoshopped pictures).
Still waiting for an answer.

Sorry to say this dear jean, I am not sure whether they will give you a satisfactory answer, from what I learned from my personal experience. Any way keep fighting

As you can see from Deepa’s comment below, this is unfortunately more common than it ought to be. I’m sorry to hear about your account; I find it very frustrating that Flickr’s processes are not more robust and that–particularly when it comes to paid accounts–they can’t offer a better response to users.