Yesterday, I watched an episode of Jessica Simpson’s The Price of Beauty which took place in Marrakesh. I hadn’t seen the show before, so had no idea what to expect, but knowing J.Simp’s provocative attire, imagined that I was in for a treat.

The first surprise was who Jessica’s host was – Khansa Batmaa! I could only wonder if the Simps did her research beforehand. The second shock was seeing how Khansa dressed Jessica and her friend before going out into Djamaa el Fna – like elderly Moroccan women (below), while Khansa herself wore a short djellaba and no hijab. 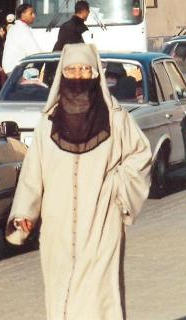 In the episode, Jessica and her friends shop in the Marrakesh medina, visit a hammam (a co-ed one, which apparently exists, or was set up just for this episode), eat sheep brain, and sit down with three generations of Moroccan women to get their opinions on beauty.

The most interesting bit to me was in the clip above, when Jessica was sitting down with the three generations of women; one of the younger women, Laila, was wearing a low-cut shirt showing her cleavage, and jeans, but pointed to Jessica’s shorts, saying she was showing too much skin. Jessica was shocked, but eventually stated that she didn’t understand how a woman showing so much cleavage could judge her for wearing shorts, thus proving my long-held theory that in Morocco, legs are way more provocative than breasts. Jessica’s friend (Ken, I think) showed a moment of lucidity, explaining that what is provocative in Morocco (in this case, shorts) is completely standard in the United States.

Jessica was her usually harebrained self, and made all sorts of stupid comments, but Morocco was given fair treatment. I haven’t seen any of the other episodes yet, so I’m not sure if Jessica went to any other countries I’ve spent time in, but I might watch another episode…on mute.

One reply on “The Price of Beauty”

“thus proving my long-held theory that in Morocco, legs are way more provocative than breasts “.
funny theory, I would be pleased if you cared to explain it in lengthy detail :-D It’s true, I mean save for some freaky conservatives, sleeveless tops are relatively ok, but shorts are not.
I would say it’s more to do with clothing/skin ratio : cleavage too is frown upon (there’s a pun !) but tights are borderline. In any case, even European standards forbade women to display their legs, until the 1920’s anyway.

Nice picture! My grandmother still dresses in that fashion !