On a hot summer day in July of 2009, I was sitting at my kitchen table, imagining an idea for a PostGlobal-like forum for Moroccans. Fed up with the existing platforms and lack of cross-blogosphere discussion in my adopted second country, the idea sprung to life. Excited, I asked Hisham Khribchi, my long-time blogger friend (whom I hadn’t even met in person at the time!) and GV colleague, to join me on the mission. Hisham brought to the table all sorts of new and awesome ideas, as well as the design, and the project’s name: Talk Morocco.

Five months later, we unveiled our new project at the Arabloggers Workshop in Beirut, Lebanon, to good reviews and tons of feedback. And now, four months after that, we’ve been judged–by a jury of our peers as well as an actual jury of renowned bloggers and journalists–to be the Best English Blog, in Deutsche Welle’s annual BOB (Best of Blogs) awards. 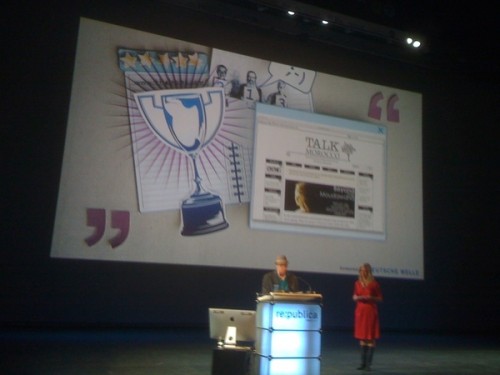 (Photo by Sami Ben Gharbia, who was present at the re:publica conference where the award was just announced)

Hisham and I will hopefully both be present to accept our award in Bonn, Germany this June. We’re both very excited to have won this honor, and hope that it will bring us new visitors and perhaps some much-needed funding for our contributors and translators.

really proud to be a contributor, and proud of the two outstanding editors ;)

Congratulations Jillian, may your sails always be full. T

I’m honored to be part of it Jill, and always humbled by your sheer passion and peerless generosity. Way to go friend.

Hey, your post is really inspiring and makes me want to get and do this.really nice one.