CONTEST is the United Kingdom’s counter-terrorism strategy, with a stated aim to “reduce the risk to the UK and its interests from international terrorism.” The UK’s Research, Information and Communications Unit (RICU) is set up to commission communications research to support the CONTEST strategy.

According to a recent Guardian piece, the RICU commissioned a study to estimate and track the scale and influence of Islamic bloggers in Britain. Like the Berkman Center’s mapping of the Arabic-language blogosphere, the study used link analysis as a method to determine popularity of certain blogs.

Unlike the Berkman Center’s study, however, which focused on the wider Arabic-language blogosphere and encompassed over 35,000 blogs (6,000 of which were then mapped, and 4,000 of which were hand-coded by Arabic-speaking researchers), the RICU study looked at around 140 blogs identified (by researchers, using keywords) as “pro-Islamic,” gathered from the blog directories BlogCatalog, Blogorama, (the now defunct) BritBlog, eTalkingHead, and Technorati, and found via keyword searches on Google Blog Search.

The researchers then identified the top 20 blogs for deeper analysis, resulting in the following table: 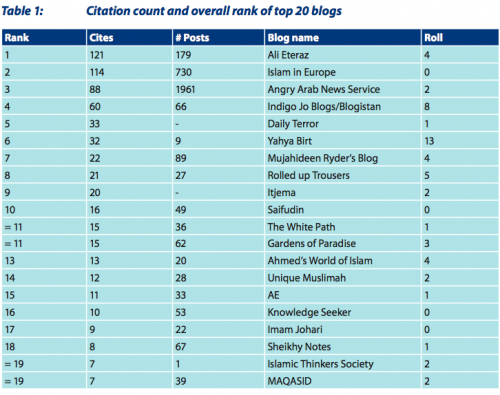 Number 3 immediately caught my eye of course; the Angry Arab News Service is a blog written by As’ad Abukhalil, a Lebanese-American professor of political science at California State University, Stanislaus and visiting professor at UC, Berkeley, who on Facebook currently describes his own religion as “Banana Cream Pies” (note to those who don’t follow the Angry Arab: a) you should and b) a quick read will show you that he’s an atheist secularist with a wicked sense of humor.)

I read the whole paper, looking for an explanation–There wasn’t one. The study’s stated purpose made things no clearer:

The purpose of this study has been to measure the size of the community of Islamic (pro-leaning) bloggers who post, in English, on topics pertaining to politics in and about the UK. Second, to gain an indicative understanding of the level of social networking amongst that community and to provide some form of hierarchical structure to it.

The study relied on link analysis, so it makes sense that Angry Arab would turn up in the initial results; he is a prolific blogger, who links often to news stories–both those with which he agrees and those which he does not. But no amount of “deeper analysis” would find him to be a “pro-Islamic leaning blogger,” as the study indicates.

The first blog on the list is that of Ali Eteraz, a Pakistani lawyer and novelist, whose book made it to Oprah’s gilded list. His writing contributions online range as far as Jewcy and the Huffington Post. I don’t actually know if Eteraz is a practicing Muslim; that would require digging beyond his web site, for sure. His “Islamic leanings” seem to be derived from his background and a deep interest in politics of so-called Islamic countries, which he writes about frequently. Based solely on his web site, is he “pro-Islamic?” As much as I am.

It’s clear to me that researcher David Stevens, of Nottingham University, who carried out the research, didn’t bother to read Angry Arab’s blog at all. His reliance on link analysis and keywords (often used by bloggers to self-define) isn’t enough; blogosphere research requires a human touch. Stevens’ research, judging by his staff profile on Nottingham’s web site, has nothing to do with Internet and society. His main area of research is contemporary Anglo-American (normative) political philosophy. I’m not sure what the UK’s Home Office was thinking commissioning blogosphere research from a philosopher with limited knowledge of blogging.

In fact, I’m not sure what the Home Office was thinking at all; if CONTEST is a counter-terrorism strategy and RICU an agency to support counter-terrorism research, then why a blog study analyzing “Islamic” or “pro-Islamic” blogs? The study appears to be making the case that being “Islamic” (or Muslim) is a short hop away from being a terrorist (or for that matter, an Islamist).

If this study is taken at face value for its link analysis, it’s perfectly sound: yes, these bloggers link to “Islamic” web sites. Any deeper look, however, shows a shallow and quite frankly, racist study that attempts to draw lines between bloggers who are Muslim or Arab, with a strong interest in politics and who are prolific writers, with terrorism.

If this is what’s shaping the UK’s anti-terrorism policy, we have two reasons to be afraid: For our Muslim friends, whose very mention of their religion can apparently deem them worth tracking, and for the fear of actual terrorist activity online, which lies far beyond any place this study could reach.

*The Guardian’s Brian Whitaker also tore the study apart, but I personally don’t feel that he went far enough in his criticisms.

Jillian, I read this article with great interest and I was surprised to learn the level of recklessness or sloppiness in conducting the so-called research or survey.

A note on Ali Eteraz: I met Ali at our first conference of Critical Thinkers for Islamic Reform in Atlanta. He was pensive and a little introverted. He was a young gentleman with good ideas. As for his practicing islam, if it means praying five times a day in traditional way , my impression was that he was not. I am not sure whether he ate pork or drank alcohol. But he was a rational thinker and promoter of peace, which is the essence of islam, that is peacemaking and peacefully surrendering to God ALONE. Though I practice prayers and try my best to follow all the instructions in the Quran, I consider Ali Eteraz thousand time more musim than those pray 5 plus times a day, fast 27 plus days, and observe hundreds of prohibitions in the name of God but does not use his God-given reason and do not promote peace.

So my sister, you are more muslim (peacemaker) than many who wear veils or beards :)

The research is a massive discredit to the work of the Home Office. Link analysis? Google could’ve done better.

“If this is what’s shaping the UK’s anti-terrorism policy, we have two reasons to be afraid: For our Muslim friends, whose very mention of their religion can apparently deem them worth tracking, and for the fear of actual terrorist activity online, which lies far beyond any place this study could reach.”

Excellent points and well-stated Jillian. Perhaps the American version of David Stevens is having your name too on his list of names worth worrying for homeland security!

This post was mentioned on Twitter by jilliancyork: Why the UK’s Home Office got it wrong: http://bit.ly/b3wpzS (@asadabukhalil, @ekatyusha, @shadi)…

I am both perplexed and saddened that such a level of incompetence could be reached. If this is the depth of research and analysis one can now expect, then I fear advising friends to send their sons and daughters to the UK for quality education.

The Home Office should lead by example. But this is poorly, if at all of any merit.

Unbelievable. I wonder if other news organizations beyond Guardian and Aljazeera have written about this.