Let me tell you a secret: I think Christopher Hitchens is an idiot. Though I admit I’m a latecomer to his columns, from the moment I heard about the SSNP incident, I was utterly convinced. In fact, I’m perhaps glad that I didn’t know much about him at the time, because I fear that I may have been swayed by some of his words. Despite his idiocy when it comes to the Arab world on the whole, he’s an extremely good writer.

That is why, while flipping through an older issue of Vanity Fair last month, I found myself hooked on an article Hitchens had written about Salman Rushdie, specifically about the Rushdie affair, the Satanic Verses, and those who had come to Rushdie’s defense. And in the midst of the article was a brief mention of a book that, despite being a Rushdie fan (and an advocate of free speech, and for that matter, an atheist), I had never heard of: For Rushdie: Essays by Arab and Muslim Writers in Defense of Free Speech. Praise be to Amazon, within 48 hours, the book was on my doorstep. 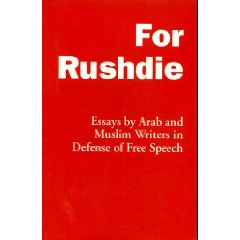 Yet, it wasn’t till today that I picked it up, thumbed through its gently-used pages, read ten or twelve of the essays. Assia Djebar, Tahar Benjelloun, Amin Maalouf (strangely and incorrectly referred to as Libyan), Mahmoud Darwish. I showed Anas the half-page essay by Darwish and his eyes lit up; he said that even though his eyes were reading it in English translation, his head and heart were seeing the words in Arabic and hearing his voice. Such is the power of Darwish.

My favorite essay, at least of those I’ve read so far, was Benjelloun’s:

…In real life we accept without protest that things such as prostitution, misery, and violence all exist. But to treat prostitution, misery, or violence in a story is often considered intolerable. It is a notable fact that censorship exists even in certain countries concerning things that nevertheless do visibly occur in those very same countries; they occur and yet this arouses no apparent shock. What arouses shock is to describe those same things in words.

Benjelloun famously fictionalized the life story of a Tazmamart prisoner in his 2002 book This Blinding Absence of Light, only three years after the era of the Years of Lead had culminated in the ascension of King Mohammed VI to the Moroccan throne. His words at the time were scathing, but not nearly as scandalous as those of Malika Oufkir, daughter of General Oufkir, who lead a coup against King Hassan II and whose family was punished by 20 years in a desert jail. Malika’s book, Stolen Lives: Twenty Years in a Desert Jail, was banned in Morocco for a time (but at last check was all over the country’s elite bookshops, along with the French translation of The Satanic Verses.

Still, as Benjelloun would say, what arouses shock is often to describe events in words. Though the Years of Lead are now spoken of semi-freely, the name “Aminatou Haidar” is off-limits, unless you disagree with her of course, not that anyone would bother touching it anyway: The Sahara is, to Moroccans, indelibly Moroccan. And in the past year, journalists have been tried for, among other things, ruminating on the King’s possible flu infection.

But back to the book…the book, which came out in 1994 or thereabouts; my copy was purchased then, anyway, by the Saratoga Springs Library on June 28 of that year, for $14.95, where it apparently sat until it was discarded. No one ever checked it out. Imagine, such a beautifully bound book, full of wonderful essays defending Salman Rushdie’s words, essays by Arabs and Muslims alike, defending words that, in many cases, they didn’t agree with…and no one ever read it. But not just my copy – evidence from Amazon rankings and elsewhere would imply that no one really read it all. It’s out of print now; copies are sold online, from libraries and the like, where they were probably discarded without their pages ever having been earmarked, their spines ever having been cracked. And we wonder why Americans are so clueless about the region.

But though the essays are all works of art in their own right, one set of two pages stands out the most. On pages 138 and 139 of my paperback copy is a two-page spread, not of words, but of sheet music; horribly complex and confusing, with no time or key signature, seemingly written for bass flute, with absurd crescendos and sharps and flats willy-nilly. At the bottom of the musical piece reads a brief note: “Pour Salman Ruchdi [sic]: afin qu’en artiste il puisse exprimer ce que je ne partage point.” For Salman Rushdie, in order that an artist might write that with which I disagree.

11 replies on “For Rushdie”

It’s a testimony to the silenced “moderate muslims” that so many people ask about.

There is also Ziauddin Sardar, who, while opposed to Rushdie’s ideas, still defends his right to say them. His book is “Distorted Imagination: Lessons from the Rushdie Affair”. In the book Ziauddin outlines why Rushdie’s novel upsets muslims, and then goes to length to cite what went wrong in both camps, especially after the infamous death fatwa.

He also wrote a chapter on the affair on “Desperatly seeking paradise”, a highly recommended book.

Thanks for the review! I have read and greatly appreciate people like Tahar Benjelloun, etc. I’ll have to try to get a copy of the book for myself.

Thanks Houwari! I’ll have to look for both of those.

ha. interesting jill. i bought this book myself at a used bookstore for $5, and as you noted, it had been previously untouched…if my memory serves me right this was around 99 or 2000. it is indeed a brilliant collection of essays.
on hitch, we’ll have to agree to disagree…read his older stuff, i think you’ll appreciate it, like ‘trial of henry kissinger,’ ‘why orwell matters,’ or ‘letters to a young contrarian,’….or even some of his really old work like ‘blaming the victims’ with edward said. truly brilliant.

I’m glad I’m not the only one to have read this, Mohamed! Though I’m not surprised that you’re the other one.

Okay, I’ll take your word and check out older Hitchens…but it will be tough for him to redeem himself in my view after that silly move with the SSNP!

I have this book on one of my bookcases, bought it back in early 2001, but have never even opened it since I picked it up in near perfect condition from a used bookstore. I have shelves of unread books :( I am now deeply chagrined that I haven’t read it and will have to find it.

This blog site is extremely good. How did you make it !?