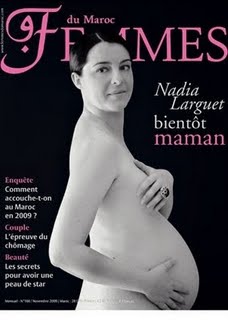 In 1991, when Demi Moore posed nude and pregnant on the cover of Vanity Fair, there was significant outrage.  While Moore’s intent was to show the beauty of pregnancy as well as her “anti-glamour” attitude, she also succeeded in angering conservatives across the country and pleasing feminists, who saw it as an act of empowerment.  At the same time, she sparked a trend that continues to this day, with stars like Christina Aguilera and Britney Spears emulating Moore’s iconic pose on the covers of magazines.  In the US, the “baby bump” has become almost passé.

This November, 2009, Moroccan television newscaster Nadia Larguet (of 2M) took to the cover of Femmes du Maroc with the same pose, making the statement (as my friend cabalamuse stated), “I am pregnant, I am beautiful, I exist.”  In a country where out-of-wedlock pregnancies are completely taboo (but on the rise), where women still die in childbirth on semi-frequent basis in some rural areas, and where abortion is illegal but not so hard to find, this is quite a statement.

And yet in some ways, Morocco makes being a mother easier.  Working women get more time off than their American counterparts, breastfeeding in public (with a blanket to cover) is normal, and there is an expectation that the extended family will help raise the child.

The article* accompanying the provocative cover dug deep into serious issues: of maternal health, of abortion, of teenage pregnancy.  And it couldn’t have come at a better time; Morocco is in many ways waking up to the realities it now faces: Just this week,  Aicha Ech Channa, Association Solidarité Feminine, an organization that provides services to unmarried women with children, was awarded a $1 million prize by The University of St. Thomas and the Opus Prize Foundation for her work in Morocco.  Ech Channa’s project, though not without its challenges, has been extremely successful; I remember first reading about it in a copy of Glamour my parents sent to me while I was living in Morocco in 2007 (that article is here).

After finally reading the full article inside Femmes du Maroc, I first saw  incongruence between the cover image and the contents of the article; it seemed to me an unnecessary provocation, like including “sex” in a blog post tag simply to get hits (which works, by the by).  But the more I saw it (and it’s been popping up in blogs all over the place), the more it seemed to me a revolutionary stance, just like that of Demi eighteen years ago: “I’m pregnant, I’m beautiful, I exist.”  And even considering local sentiment and sensitivities, which shy away from nudity, public displays of affection, scantily-dressed women, I, like cabalamuse, would like to make the case that this is indeed revolutionary: It is a woman, standing up, unashamed and unafraid, in a country where “television channels are flipped at the mere sight of a man an a woman kissing, where, in neighborhood foodstuff stores, [and] menstrual pads are stuffed in a black plastic bag to conceal them from the embarassed looks of customers.”  It is revolutionary because it is so far out of the realm of what is acceptable, and out of the realm of what is (publicly, anyway) considered beautiful.  And it is, beautiful.

*If anyone would like the full article (in French), I can email a scanned copy.

10 replies on “Pregnancy as Provocation”

So, why do I have only the September issue? :o(

I just added the * that I’d forgotten. I can email the scanned article to you :)

It amazes me that in the 21st century, there are still people who are horrified at any public reminder, no matter how subtle, that sex exists.

I am glad you finally see things my way …:-)

I wonder how much money Nadia received for posing naked?
regards

can we all get into the 21st century please, isnt it about time we stopped pretending that things are tabu still, are we not all educated enough to know what is right, and wrong!, we can still shelter our children from things they need not know, but being an adult, if you dont want to look, then dont! but dont judge because someone has no hangups about their body!
you GO Nadia, you are beautiful and should be proud, so should ALL pregnant ladies, its is something to be proud of!!

It is a woman’s pride of having a baby inside her womb. It only happens very often ( depends on how many babies she wants). Not all women has the capability of getting pregnant. I don’t see the reason why it makes a big fuss when a pregnant woman poses for nude. It depends on how the way it is presented.

What a great post! its amazed me, shes good to look at, so proud of her, thanks for sharing this wonderful post and keep it up!

I admire those women who dare to have a pictorial like this, despite of the situation whom I know that bearing a child is not that easy. You should have an extra careful in taking care of the fetus inside your womb but she can still project like an ordinary girls who is not pregnant.

Three and a half years later on, I’m nonetheless a happy user. The fact that Google Voice is totally free turns out to be only a secondary component of its attraction — it’s all the things it does to assist me stay effective that make it a keeper.

Dialing in and listening to prolonged voicemails can be a discomfort, particularly when you have a lot of them. Thats why get virtual sms number systems offer Study Your Voicemail attributes. When someone phone calls and leaves a concept, that message will be transcribed and despatched to your e-mail. Then, you can read it whenever you have the time.

During your “regular company hours”, make sure other home members understand you are operating and not to be disturbed besides for true emergencies. This is simpler if you can separate your personal and work space. If you can possibly swing it, have a independent room with a doorway you can near. This space can be multi-objective, but ought to be utilized for only one thing at a time. If your workplace turns into the family members space at evening, turn off the computer and put away your files before switching into family members method. If you have to work late, your family members will require to have another area they can occupy for those hours.

You get tons of integrated attributes. Quit having to pay additional for contacting attributes as most VOIP companies provide a myriad of features for free. Some of these attributes might include three way calling, voicemail, voicemail to e-mail, e911, caller ID, and many much more.

With VoIP, “local” in North America nearly usually includes each the US and Canada; some also consist of Western Europe, parts of Asia and components of Latin America. For these countries not included free, international plans are available for far much less than regular LD businesses. Or you can make occasional calls with out a strategy for much reduce for each-moment costs than most LD ideas. This generally applies – more or much less in reverse – for VoIP solutions in Europe, Asia and elsewhere, as nicely.

VoIP customers enjoy a selection of totally free calling attributes, for which they had been billed additional with traditional telephone services. Those attributes consist of voicemail, caller ID, contact conferencing, call waiting around, contact forwarding, and numerous others. VoIP users can have their voicemail messages e-mailed to them for simple playback and referencing; with some companies, customers can click on to contact contacts straight from Outlook. Moreover, consumers can acquire additional figures (also known as digital figures) so out-of-town friends and family members members can dial a local quantity to reach the VoIP consumer easily and affordably.