My cat is very photogenic. Has been since she was a wee kitten in Meknes:

Have I mentioned that my cat is Moroccan? When I found her she was so small, and I had another, very large cat, so I just started calling this one “Little Cat”. Eventually, that became “L.C.” (and only sometime after that did I hear about Lauren Conrad, the girl on the reality show Laguna Beach (now The Hills). I also call her “kteta” (k-tay-ta), which sounds like a cute nickname but which really just means “female cat.”

She does prefer Arabic to English though, and if I tell her to “scutz” she knows what to do. If I affectionately call her “habiba,” she comes running and if I find her scratching the furniture and sternly call out “baraka” she stops in her tracks (okay, that last one’s a total lie).

And she also regrets that there’s no Lolcats in Arabic. So she made her own: 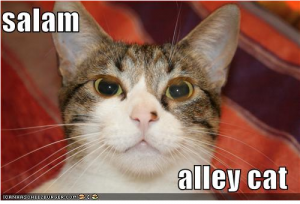 Why “Little Cat”? Why not “mshisha”? It sounds better than “qteta”, doesn’t it?

I don’t know, L.C. just kind of stuck! I actually prefer “kteta” to “mshisha” (probably because the latter is more difficult to pronounce quickly, when you’re calling her!)

I see.
But has your qtita gotten the Green Card? Will it be granted American nationality?