Ever since discovering Google Analytics’ geolocation feature, I’ve been fascinating with finding out where my readers are from.  I’ve always known that the majority come from the US, the UK, Morocco, Canada, and inexplicably, the Netherlands, but am always pleased when a new group of readers show up.  In fact, I noted just a month or so ago that I had very few readers from Africa; that changed when I posted a GraphJam map mocking the world view of the continent and Uganda Scarlett Lion picked up the post.  I now have a bunch of visitors from Uganda, as well as some from Kenya, South Africa, Namibia, and Cote d’Ivoire, in addition to all of the North African nations.

Now that I’ve conquered most of the world, rather, developed such a broad readership (and upped my monthly readership by a few hundred in less than a month), I’m more interested in who’s not visiting.  In addition to the unmentioned African nations, here’s the roll call of who’s not visiting my blog (try singing the list, it’s fun):

Central Asians from the -stans (you know, Kyrgyz, Kazakhs, Turkmen, Tajiks, and Uzbeks, plus Afghanis), Mongolians, Latvians, Belorussians (not surprised, Lukashenko probably found my blog offensive somehow and blocked it), Yemenis, Iranians, Iraqis, Burmese (again, not surprised), Laotians, Vietnamese, North Koreans (har har), Lithuanians, Cypriots, Colombians, Ecuadorians, Paraguayans, Uruguayans, Chileans, Guyanese, French Guianese, and Surinamese, Armenians, Azerbaijanis, Georgians, Papua New Guineans, Timorese, Nepalese, Bhutanese, Danes (weird!), Central Americans in general (except for Guatemalans and Mexicans), Caribbean people (except Trinidadians – represent! – and Jamaicans), and people from all of the little island countries that are completely invisible on Google Analytics for some reason.  It seriously took me five minutes just to steady my hand enough to click on Bahrain (from whence I do have plenty of visitors, doubtless thanks to GV)

I suppose that looks like a lot…but when I consider the interesting places from where readers do come (Iraq! Sri Lanka! Brunei!) and those countries that send surprising numbers of readers (Japan! Lebanon! Ukraine!) I’m impressed.

When I was little, I would always notice the tags on my clothing.  I would check to see where each item was made (China was always popular, as were Malaysia, Sri Lanka, and Philippines) then spin my globe to locate the country, always fascinated by what I found.  I would imagine (blissfully unaware of sweatshops) where each piece of clothing came from and how far it had to travel before it reached me.  I would ponder how many hands each had passed through en route.

I don’t think about the native land of my clothing much anymore; for one, I had to stop paying attention to every cause or my head would explode (I’m a cause-aholic), but also because I don’t need to – I can now ponder what my friends around the globe are doing instead.  I know, I’ve developed an almost fanatic love of the global blogosphere, GV, and all that goes with it, but you’ve got to understand – this is the apex of my childhood hopes and dreams.

And lest you think the obsession ends there, I realize I haven’t talked much about my new job.  Part of it is that I spent a good part of the summer overwhelmed (by more than just the job); the other part is that I haven’t yet figured out how to put into words what OpenNet‘s work means to me.  I can certainly take you through the basics, but instead I ask you to be patient; specifically, until Herdict is ready for full launch.  I think the two projects together bring the idea full circle, pushing the notion of free speech online forward and into the hands of regular Internet users.

Before this develops into a tangent (more than it has already, anyway), I bid you adieu. May the forces that be send me visitors from every corner of the globe! Also, doesn’t this totally look like Spain has chickenpox? 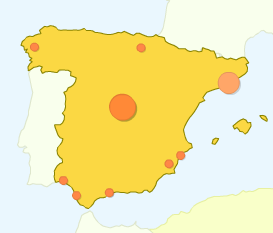 *EDIT: Just one day later, a visitor from Burkina Faso and one from Angola graced my pages. At this rate, I’ll have the whole world here in less than a month!

3 replies on “Where do you come from?”

Hi, I found your blog on this new directory of WordPress Blogs at blackhatbootcamp.com/listofwordpressblogs. I dont know how your blog came up, must have been a typo, i duno. Anyways, I just clicked it and here I am. Your blog looks good. Have a nice day. James.

Your IP address comes up as Germany :)