When I first saw the poster for “Draw Mohammad Day,” I admit, I was amused. In reaction to Comedy Central’s decision to censor South Park, Seattle-based cartoonist Molly Norris had drawn up a poster asking people to draw the Prophet; the poster, below, was humorous and whimsical, with the Prophet depicted as a toaster or a teacup rather than a turban-wearing bomber (such as in the famous Danish cartoons). 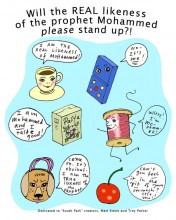 Since the initial campaign, a Facebook group and blog have been created, seemingly without Norris on board.  Following Pakistan’s block on Facebook today, I decided to take a look at the blog to see what the reaction was.

Front and center, on the blog‘s header was that now-infamous depiction of Mohammad wearing a turban-shaped bomb.  The Facebook group was full of nastiness: depictions of the Prophet as a dog, slurs about Muslims and Islam, etc.

Now, in the case of the Mohammad cartoons, four years ago when it happened up till now, I will defend the cartoonists’ right to draw what they please, no matter how repulsive I personally find it.  In that same vein, I defended Iran’s Holocaust cartoon competition.

With that in mind, I’m incredibly disappointed with this new campaign.  Rather than calmly and peacefully defend free speech by whimsically portraying the Prophet as a teddy bear or a toaster, the group and blog’s admins have chosen to provoke, thus alienating plenty of supporters of free speech who might otherwise have backed them.  The project is a work of immature Americans who feel that asserting their right to free speech–by any means necessary–is more important than showing an ounce of respect (and for that matter, dignity) by finding a middle ground.

Draw Mohammad Day is May 20.  I will not be participating.

Exactly. This is one of these things where free speech is fantastic, but using that free speech to insult millions of people gratuitously, just because you can and want to, is unbelievably childish. This cartoon says it all: http://edgeofthewest.files.wordpress.com/2010/04/sallallahualaihiwasallam.png?w=500&h=247

The bigger question is WHY ????….why at the first instance initiate an act which has intimate feelings by another group…Im positive there are numerous subjects available in the world which can prove freedom of speech and liberty….JEWS all over the world react to denial of holocaust ..a stance which is accepted by the world…so why not apply similar format for muslims…what really is intended to be achieved from this act or where the quality of life will improve…in actual it will fuel anti west sentiments and make the task of mopderate muslims difficult in containing militancy….

I see where you’re going with that. But a more accurate comparison would be to western media making fun of Jesus which is quite common. South Park actually make fun of Jesus all the time on their show.

I as a muslim, and all muslims around the world, are not considered muslims unless we respect and believe in Jesus as a messenger and prophet from God, I do not approve the acts of the media companies who make fun of Jesus, why should I be any less tolerant to anyone making fun of Prophet Mohammed!!??