Just after Christmas of last year, I started getting some interesting emails. Well-written, polite, and thoroughly researched, these emails encouraged me to look into, and perhaps write about, the increasing push from media and advocacy groups in Japan for a law banning hate speech. Over the course of a few weeks, I received several emails, and quite a few tweets, from a number of different people, all of whom appeared to be either Japanese women or Anglo-sounding men.

Now, this isn’t all too strange on face: I have written about the futility of hate speech bans before and am known for having expansionist views on free speech. But I’ve never written about or indicated any expertise on Japan, so the sudden onslaught was enough for me to question the source. I sent an email to my colleagues asking them to flag any emails they received, and asked a friend in Japan for some additional context. In the end, I decided that this wasn’t my fight, and that I wouldn’t write anything.

Though the pressure stopped, the tweets continued, with two accounts in particular piquing my interest: @MoonMetropolis and @DreamerRyoko.  Both appeared to be Japanese women interested in free speech, but their command of English and knowledge of global speech laws raised my suspicions; surely, if these women were experts, I’d have met them at a conference at some point? Nevertheless, I continued to take their identities on face value, until something bizarre happened: A lawyer that I’d briefly interacted with last summer in Australia when giving a talk at his law firm, Josh Bornstein, had his identity stolen (as we now know, by a man called Joshua Goldberg) and used to write hate articles. Privately, a friend figured out the Joshua Goldberg connection and we discussed it. I can’t remember how I made the connection, but back in April I messaged him suggesting that I thought Goldberg was @MoonMetropolis. I then forgot about it, as the account had mostly stopped messaging me.

Cut to this week: Joshua Goldberg has been arrested for the role played by another one of his many sockpuppets, Australi Witness, an Australian jihadi who encouraged the attempted terrorist attack that took place in May in Garland, Texas.

This feels so creepy. Not only did Goldberg steal Bornstein’s identity, but he used the Australi Witness account to encourage harm toward him. For me, on the other hand, he had nothing but praise. And yet Bornstein and I are connected, as are a few of the other people he harassed. Is there a pattern? I don’t know. 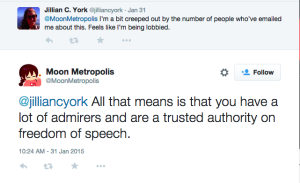 There’s something to be said here as well for media literacy. I knew immediately that there was something fishy going on with @MoonMetropolis and @DreamerRyoko, and with Tanya Cohen, another of Goldberg’s sockpuppets. But I was under no threat; the really scary thing is what he did in his “role” as a jihadi. We already know who’s most susceptible to that kind of influence; undoubtedly someone as “talented” as Goldberg could truly have played a role in encouraging an attack.

Now, looking back at the emails, the weirdest part is that Goldberg identified himself to me right off the bat. Unintentionally, but nevertheless; in his first email, signed “Ryoko, an Osaka student and Americaphile,” the email header actually says “Joshua Goldberg,” as clear as day. I noticed at the time, but didn’t put two and two together until much, much later.

I don’t have any conclusions right now. To be honest, I’m still a bit freaked out that I was in communication with this person for so long, under so many different names. This is yet another thing that raises my guard and makes me less likely to respond to tweets (criticism, asks, or otherwise) or people who approach me in bars. This doesn’t change my views on the right to anonymity (which I view as absolutely clutch for so many people and so many reasons) but it does make me more wary, and that sucks.

Edit/addition: A couple of friends have already contacted me to see if strange messages they received in the past year match up to mine. With apologies in case any of mine came from “real” people, here are the email addresses he used to contact me:

One reply on “Me and Joshua Goldberg”

[…] Mariam Veiszadeh, an anti-Islamophobia proponent, to smear her reputation. His trolling fooled activists, journalists and even Intelligence analysists, such as Rita Katz of the SITE Intelligence Group, […]