Yesterday, my dear friend Morgan re-posted the following image with this comment: “It appears that courage is a white dude thang….” 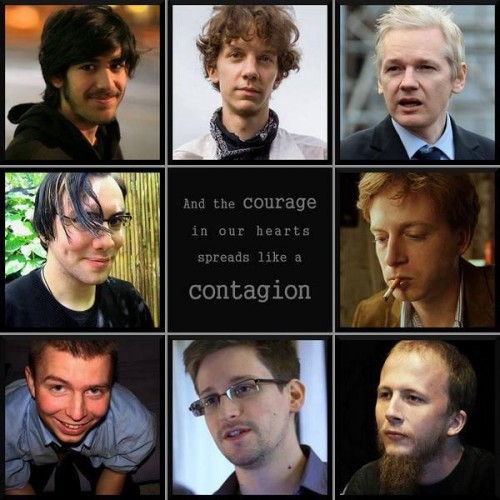 The image, posted by Pirate Parties International, features whistleblowers and others who have been lauded for their courage in the vague but connected realm of Internet activism. The image also only features white dudes.*

I was incredibly disheartened by the majority of comments Morgan received. While some people tried to argue that Jewish men aren’t white (a valid perspective in relation to some issues, but not this one), others pointed out that Chelsea Manning is a trans woman (true, but she’s not represented as a woman here). Even those that understood the problem only seemed capable of coming up with one missing woman: Laura Poitras.

The lionization of white dudes is a common, even basic, issue that’s been getting a ton of attention lately, but I guess I’m still surprised when it happens in what I consider to be my own community. It’s not that some of these white men aren’t heroes, rather, it’s that by representing courage with only white male faces, we erase the work of many other incredible and heroic whistleblowers, activists, lawyers, and hackers.

As Morgan reminded me, this is a self-perpetuating problem. White men feature and promote the work of other white men, leading to boardrooms and other spaces that look like this. Except, in this case, there are other people in the room. Hell, there are people in the Pirate Party that could’ve made the cut. And yet, somehow, they didn’t.

In any case, we knew what we had to do. So with the photo editing assistance of the talented Marie Gutbub, we made our own version. Please share it widely.

There are many talented women and people of color who deserve to be on this list. Rather than creating a rigorous process to select them, though, we instead just quickly came up with eight names. It took about one minute, demonstrating that you don’t have to look very far to find heroes that aren’t white men.

It was pointed out to me later that the image was published before Chelsea’s transition was made public. The onus is still on the Pirate Party for sharing it (not only for this reason) but they’re not responsible for its creation.

14 replies on “Courage: It’s not just for white men”

The image didn’t came from the pirate movement, it came from an account of Anonymous, some local pirates and ppint (re)tweeted it. Thanks to including in your version Birgitta Jónsdóttir who is icelandic MP on behalf of the icelandic Pirate Party and thanks to link to Amelia’s wiki page…actually the successor of Amelia at the EU parliament is also a woman Julia Reda, elected on behalf of the german Pirate Party http://juliareda.eu

getting sick of gender and race …. can we PLEASE evolve beyond such narrow considerations?

Because sexism and racism continue to crush people and continue in small and large ways, including through unexamined biases, as we see in image #1.

If you are getting sick of gender and race imagine how you would feel if you had to deal with them everyday as barriers to your advancement and life? I have no idea what your racial or gender identity is, so forgive me if you are a black lesbian (something tells me you might not be) but I think we are capable of walking and chewing gum at the same time. Our struggle for internet liberty is tied up in political liberty for all people and, yes, the struggle for gender and racial equality is not over.

I’m sure that many of the people who deal with the brunt of those inequalities would like them to be resolved as well, but they aint. Ignoring them won’t fix the problem, even if you might find it slightly less interesting to discuss.

Jake (PS just acknowledging that I am a middle class, white, hetrosexual man so have little to no direct experience about what it feels like to be on the ass-end of racism or sexism. )

Wow, some people really want to be a victim and they take offense in a picture from the web. “There are not enough vaginas in that picture!!!11!”

Cry me a river, woman.

Thank you for your wisdom and courage in highlighting these heroes who sadly don’t get nearly the amount of attention or recognition they deserve.

I am saddened that the incredible work of these courageous folk keeps getting overlooked because they’re not part of the right club.

so stop using the concepts .. they are limited and can ONLY result in limitation

[…] may have heard about the original #couragehasmanyfaces. Jillian C. York (pictured in the center) wrote up an […]

[…] and personal safety in the cause of keeping the internet free and safety are white dudes. This, as many people, including my friends and comrades Jillian C York and Morgan Marquis-Boire, have poin…, is not the […]

As always, the wisdom you’re sharing is needed, important, and considerate.

There are still only two races represented. Hayaan Hirsi Ali would have made a great addition to the list.

In my opinion, there is nothing courageous about taking up with right-wing fascists to promote your cause. Ali gets no respect from me.

A woman who has been subjected to FGM, then escaped a brutal society and now stands up for women’s rights, equality, feminism, and civil & religious liberty — despite death threats and real attempts on her life — is the epitome of courage, no matter who you claim she associates with. Courage is not limited to those reaffirming your specific political beliefs.

No. Ali doesn’t stand up for women’s rights, she uses women’s rights as a bludgeon in her hatred of Islam. She’s pro-niqab ban, which is antithetical to freedom of choice, identity. She has expressed violent ideas toward the religion that she was raised with. No hero of mine.

Also, to your comment that that image only showed two races: Look again. That’s simply false.