In possibly the funniest thing that’s ever happened to me on the Internet (and please remember that I’ve been called a fattie by the daughter of the Uzbek dictator and crowdfunded my ticket to troll a Thomas Friedman event), the New York Times, that paper of record, has today issued a correction that’s been called “the best thing on the Internet this week.”

It all started when the Wall Street Journal (that paper of disrepute) published an article in its ‘Experts’ section by none other than third-rate actress and ThighMaster-peddler Suzanne Somers. Entitled “The Affordable Care Act is a Socialist Ponzi Scheme,” the article was riddled with errors and ripe for humor. So, I did what anyone would do, and I tweeted a few fake headlines.

One of those headlines (and in my opinion, not even the funniest)—”I Starred In Two Mediocre Sitcoms, Let Me Explain Government To You”—made it into the New York Times, both online and in print (October 31, page E7). 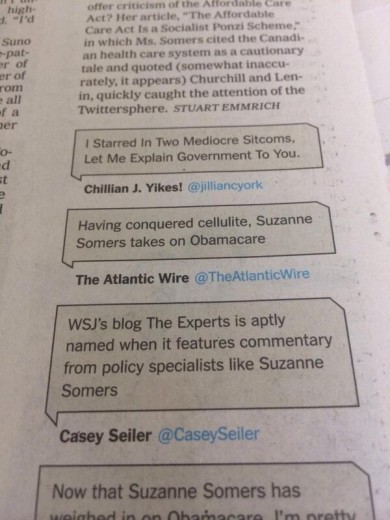 The hilarity could’ve stopped there, except it was Halloween week and so, in conforming with my friends, I had changed my Twitter name to “Chillian J. Yikes!”, something that a) I appreciate is allowed on Twitter, as pseudonyms are increasingly banned from online platforms and b) Katherine Maher (or should I say MUAHAHAHAHAR) had the good wit to come up with for me.

And so, The Paper of Record quoted me as Chillian J. Yikes! The fun could’ve stopped there, but alas, it did not, for EFF’s media coordinator Dave Maass wrote a note to Jim Romenesko, who covered it on his popular blog, resulting in…a correction from the New York Times:

And there you have it.  Hilariously, BoingBoing, HyperVocal, and Poynter have also now covered the story.

[…] One of the bigger criticisms is a lack of reporting. To learn more about it, I reached out to EFF’s Director for International Freedom of Expression Jillian C. York (not to be confused with her yearly online pseudonym, Chillian J. Yikes). […]