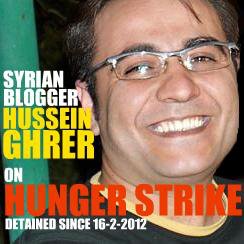 By now, it’s pretty apparent that the Syrian regime listens to no one.  And yet, as the friends I know who have spent time in Syrian prisons tell me, international attention does matter: it might help a blogger get better treatment, evade torture.

Hussein Ghrer has been held for nearly five months.  A campaign, launched yesterday, seeks to raise attention for his plight: Hussein has entered into a hunger strike and has a heart condition.  He has been held for far longer without referral to a court than the 60 days that Syrian law allows.  His friends and family are terrified.

Unlike Razan Ghazzawi, Anas Maarawi, and Bassel Khartabil (Safadi) detained before him, I don’t know Ghrer personally; we’ve never interacted.  Similarly, because he blogs primarily in Arabic, he has received far less attention than the others, and yet, his case is just as heartbreaking, and due to his health, perhaps more dire.

Between them, many, faceless and nameless, have been detained, expelled and brutally murdered. Many that have not been given the honorary hashtag. Many that are being slowly broken in the dungeons of Syria’s own fascist incarnation. But make no mistake, we are by no means more free.

With every new detainee, our country, that idea of country, chokes a little bit more. With every new detainee, our own incarceration becomes a little tighter, and our exile a little less bearable. To liberate them is to deliver ourselves from this nightmare, and to bring back to this land its lifeline. Make no mistake, #FreeRazan, #FreeBassel or #FreeHusssein, all mean the same thing:

And Ghrer now has a campaign, but there are still hundreds more–bloggers, citizen journalists, activists–whose names will go unspoken in the media, hundreds whose families may never even know their fate.

But for their sake, for the sake of all of these dedicated Syrian activists, let’s speak up when we can. When there’s a case to speak about, when we have the ability, let us not remain frozen merely because we will never be able to name them all.