Yesterday, I mentioned in a post the importance of talking about tech companies not only when they do poorly, but also when they do right. In that post, I mentioned how Twitter has shied from moderating content on their platform even in the most contentious of circumstances, showing their dedication to free expression online. There are numerous other examples: YouTube’s dedication to leaving up violent content when it constitutes news (particularly relevant in the recent uprisings across the Arab world) is a good one. And while I disagree with Flickr’s decision vis-a-vis Hossam El-Hamalawy’s uploading of photos from Amn El Dawla, I appreciate Yahoo!’s thoughtfulness in evaluating their policies after the fact.

Recently, the Electronic Frontier Foundation (aka my soon-to-be-employer) released a report evaluating transparency and privacy practices of the most popular online companies. The easy-to-read format of the report shows Google coming out on top, which doesn’t surprise me: The tech giant has made a valiant effort to make users aware of government requests for data, as well as government-initiated content takedowns. Twitter appears to be doing a great job as well, which doesn’t surprise me. On the other hand, the absence of Skype betrays a narrative of it being a “safe tool” (something that privacy experts have long known not to be true). 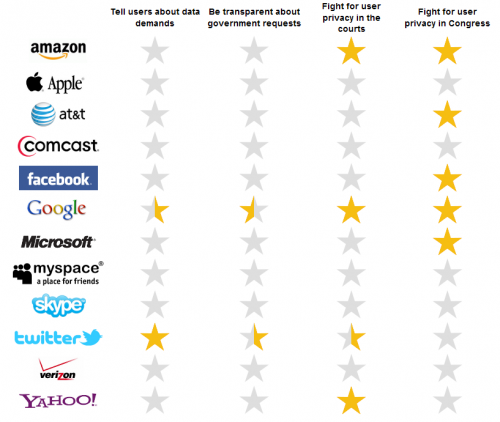 Though the report is thorough in dealing with privacy and transparency, I would love to see a similar report on how the same companies rank when it comes to censoring user content (hey, maybe that’ll be my first project!). I would imagine we’d see Twitter somewhere near the top, and Facebook just about dead last.

3 replies on “When Tech Companies Do Right”

Hi Jillian, Thanks for posting this. Am amused that MySpace is even present on that list.
Could you explain what you mean about Skype? How was it publicized as a “safe tool” and what do you mean that it’s not? It seems to me that Skype kind of belongs in a different category than Facebook, Twitter, etc – as there isn’t as much opportunity to put up information about yourself….

You know, kudos to Twitter, but has anyone considered that the wikifriends can’t have been the first government request they’d ever gotten? It was just the first one they decided to break policy and publicize, so far as I know.

Still, good to not be evil in the moment.

[…] (controversy over whether Google+ should ban anonymous and pseudonymous accounts) and describes what companies do right. category: Social Media tags: blogs, video addthis_url = […]