An awful slogan for an extremely interesting campaign. The “Yalla! Count” campaign, whose slogan is the above, aims to encourage Arabs to write in “Arab” as their race on the upcoming 2010 census instead of checking the “White” box. The campaign picked up traction this week when Newsweek published a feature article referencing the campaign and its background. 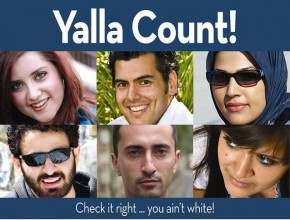 But as my friend and fellow blogger The Moor Next Door points out, the article ignores the history of Arab “Whiteness” in the United States.   If we are to construct Whiteness as not simply a race or skin tone, but a cultural or ethnic identity, then we can realize how the desire to be White has played into a century of assimilation and rejection of culture.

I recently read anthropologist Karen Brodkin’s How Jews Became White Folks: And What That Says About Race in America; although the history of Jewish immigration differs considerably from that of Arabs (in more than one respect), there is a shared theme: the assimilation to Whiteness. In the case of Jews, such assimilation is tied directly into the shifting of American opinion post-WWII. As Brodkin writes:

[Suddenly, after World War II,] the same folks who had promoted nativism and xenophobia were eager to believe that the Euro-origin people whom they had deported, reviled as members of inferior races, and prevented from immigrating only a few years earlier, were now model middle-class white suburban citizens.

In the case of Syrians, as with many other ethnic groups, assimilation came with the fight for naturalization. At the turn of the last century, naturalization in the United States was limited to “aliens being free white persons, and to aliens of African nativity and to persons of African descent.” Although there were a number of Syrian immigrants already residing in the United States at the time (and a couple of previous smaller cases), in 1915, a Syrian in South Carolina named George Dow was refused citizenship; his resulting appeal case (Dow v. United States 226 F. 145 – 4th Cir. 1915) decided that Syrians were “to be classed as white persons” thus making them eligible for naturalization. As Sarah Gualtieri writes:

Although it was not the last time a Syrian appeared before the courts attempting to litigate his (the cases involved men only) racial status, the Dow case established a weighty legal precedent in favor of Syrian whiteness.

Gualtieri’s book, Between Arab and White: Race and Ethnicity in the Early Syrian American Diaspora, focuses on the history of how the first wave of Arab immigrants, who were mostly Christians of [what would today be considered] Syrian, Palestinian, and Lebanese origins, positioned themselves as White to gain access to the privilege of being a United States citizen. Later waves of Arab immigrants comprised more diverse populations, including more Muslims; the second wave naturally included a large number of Palestinian refugees, while the third wave (1960s to present) included a diverse group, many of whom were fleeing political persecution or hardship.

Although the first wave of Arab immigrants paved the way for Arab immigrants to gain citizenship, the “White” label didn’t necessarily stick (although apparently Syrians are still widely considered white, as evidenced by white supremacist  David Duke’s visit to Syria). While it’s true that many Americans of Lebanese and Syrian descent have assimilated into White American culture (Pop singer Tiffany anyone?), that simply doesn’t hold true for most Arab-Americans, hence the census campaign.

The “race” question on the current census includes Black, White, American Indian/Alaska Native, Asian, Hawaiian/Pacific Islander, while the “ethnicity” question determines whether or not one is of Hispanic/Latino/Spanish origins. The Census Bureau explains the details of each racial categorization on its site; White is meant to include: “A person having origins in any of the original peoples of Europe, the Middle East, or North Africa. It includes people who indicate their race as “White” or report entries such as Irish, German, Italian, Lebanese, Near Easterner, Arab, or Polish.”

So what will the campaign accomplish? For many, it’s simply a matter of feeling recognized as a distinct group, separate from the White majority. For others, it’s a political matter; as comic Dean Obeidellah states in the Newsweek piece, “A lot of Arabs do not respond to the census, and they don’t realize that it gives us more influence politically to have people know how many of us there are in this country.”

Although  federal law protects census respondents’ privacy, there are concerns about racial profiling amongst Arab communities as well, particularly in light of recent efforts by the TSA to step up racial profiling for airline passengers. Either way, I personally support the campaign, as I think it’s important to be seen and heard as a community.

Thank you Jillian for the very informative article.
The French Census is the most humanist of all as it intentionally omits ethnicity and race. I have no serious “political” problem in identifying myself as Arab although I know how totally inaccurate that is. There simply is no such race. While Saudis and their neighbors might be able to claim that they are Arabs most Syrians cannot. Not only are we older than the Arabs and the Jews we are in fact older than the migratory Semitic groups that eventually settled in the Levant.
Syrians have at least Roman, Greek, Turkish, European (Crusader) and Semitic & Arab ancestry.
If I had to answer such a senseless question I will choose Leventine because that is as close to truth as I can get.

Frankly, there’s simply no such thing as race at all; I wish that the entire concept of the question would be revised. But, as it stands, I can see how some Arabs can feel frustrated at the limited choice, particularly in the United States, where they’re frequently “othered” as non-white, but don’t fit the other categories offered either.

But all said and done, it’s a tough question, and one that I don’t really have an answer to :)

I disagree with you calling the slogan “awful.” Is it so “awful” for Arab Americans, along with other Middle Eastern Americans, to resist the pressures of whiteness/deracination and make our political presence visible? Despite our federal race classification, we generally do not identify as white, nor are we ever granted the benefits associated with whiteness. I am curious to know as to why you dismiss a slogan that reflects the reality of many Arab Americans; a statement like that reeks of white privilege and condescension.

My problem with the slogan is grammatical – not only does “check it right” make no sense (it should read “check it correctly”), but “ain’t” is a slang term. The slogan, in my view, is unprofessional. It’s more appropriate for a college campus than a national campaign.

I did in fact read your whole post before commenting, hence why I am surprised at your condemnation of the slogan. Grammar or good publicity are not sufficient grounds to dismiss a groundbreaking campaign that affirms a separate political identity for Arab Americans. The campaign was not designed to look proper and formal for the approval of white politicians; it is a popular, grassroots one that speaks to a new generation of Arab Americans who immigrated to the US or were raised by immigrants. Frankly, I do not think it is fair for a non-Arab American to determine what is “professional” enough for our community; that should be up to community members and organizers to debate. As evident in the Newsweek article, plenty of Arab Americans have endorsed the campaign, despite the insistence of pro-assimilation mainstream organizations (e.g. the Arab American Institute) to remain classified as “white.”

Fair enough, Hoda. As you know, then, I support the campaign; I don’t feel that our difference of opinion on the slogan itself did not warrant your accusing me of condescension, particularly when my opinion on this is heavily informed by conversations with Arab friends who agree that the slogan is tacky (fair enough, I didn’t state that) – not to mention a number of friends who have no interest in identifying themselves as racially Arab. And yes, of course, I have friends who agree with your stance as well–but don’t dismiss me taking part in the conversation.

But again, you’re stating that I dismissed the campaign, which I did not. I only criticized the slogan.

Just because someone is not a member of the Arab-American community(exclusive club?) doesn’t mean that they don’t have the right to state an opinion of a public campaign. Also, here’s one thing (us) Arabs need to learn how to take constructive criticism with an open heart.

I think York have raised many valid points to which you only replied by attacking her or denying her the right to state her opinion. That’s not a basis for a discussion on anything.

[…] category “white” in the current census. The “Yalla! Count” campaign, whose slogan “Check it Right, You Ain’t White,” as Jillian C. York points out is, for some, “simply a matter of feeling recognized as a […]

The Portuguese-speaking community has a similar problem with the US Census. Unlike with Spanish speakers, who have the term Hispanic, Lusitanic isn’t a commonly used term among Portuguese speakers (although you do hear Luso-American). So the Massachusetts Alliance of Portuguese Speakers is asking people to write-in their specific nationality: Brazilian, Cape Verdean, Portuguese, etc.

Since Portuguese speakers are naturally compared with their Spanish-speaking neighbors, the privileged position of the Hispanic community is considered especially unfair by some Luso-Americans. For example, the children of Spanish speakers often get preferences in college admissions while Portuguese speakers don’t as they are considered “white.” So this census move is an attempt to gain some social/political parity as well as asserting ethnic pride.