This week’s Listening Post–the Al Jazeera program that includes clips from citizens all over the world with varying views–discusses “Syria’s media tug of war.” I haven’t listened yet (I’m at a conference) but the subject is pertinent and timely.

Today, there are two stories making the rounds that illustrate this “tug of war” perfectly. The first is a New York Times blog post that demonstrates the Syrian state news agency’s (SANA) falsification of evidence in its argument that rebels are funded by foreign agents. Another, on CNN and elsewhere, reports a tragedy: More than 40 Syrian soldiers allegedly executed by the regime. In this case, the story may very well be true…but the only source is unnamed “activists.”

In fact, the latter is entirely illustrative of the mainstream Western (and Gulf) media’s approach to Syria. A quick glance at the reporting done by the New York Times, CNN, Alarabiya, and others shows that “unnamed activists,” “Syrian opposition activists,” and “human rights activists” are their primary–and often, only–sources.

In a paper I wrote for the conference I’m currently attending, I analyzed the reporting of several mainstream news sources on Syrian casualty reports between November 2011 and February 2012. While that paper isn’t quite ready for prime time, here’s a table illustrating what I found: 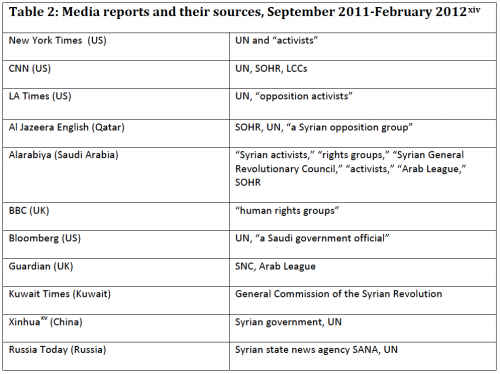 As I intend to argue in my paper, these sources…and their numbers (which vary wildly) matter. As I’ve written elsewhere, I have personal history with Syria. I have known and talked about the horrors of the regime since long before March 2011. But while even 1,000 civilian deaths are far too many, these numbers matter when they’re being used to justify intervention. The media’s almost total reliance upon activists–not simply citizens, but self-described activists–is therefore problematic.

And yet, criticizing that fact has become even more problematic. As I said on Twitter earlier today, “question activist reports and you’re shabih. Report on regime atrocities and you’re a shill for the GCC.” Seriously…you can’t win. The international community largely appears to view Syria in terms of black and white when the situation is in fact quite grey…or at the very least, unclear, unverifiable.

This post isn’t about which side is right or wrong. As I’ve said before, what I think about Syria is well-known but frankly, it truly doesn’t matter in the grand scheme of things. What concerns me, rather, is that the media–whose job it is to report facts, objectively*–is not only pushing a certain narrative, but also ignoring certain truths: the non-civilian casualty toll, for example (this one in particular bothers me when I think about all of my friends that did or almost did their compulsory Syrian military service).

What bothers me most, however, is the sheer certainty with which both sides attempt to make their points. The New Yorker in the screenshot above, for example, is so sure that “one side is for life, the other for death.” I’m not so sure. I’m certain that the regime is killing civilians (if you’re going to argue with me on that, just go away), but I’m not sure that there aren’t bad actors amongst the legitimate opposition. I can’t be sure…especially not when the media isn’t doing their job.

*not my favorite term, as you might know, but it’s nonetheless relevant.

Excellent article Jillian, it is indeed a serious problem when media don’t do what they’re supposed to do: report ‘verifiable’ facts or at least have the decency not to present them as certainties.

Here are just a sample of very recent fabricated videos. There have been literally hundreds sinc the beginning of the uprising.
“With such friends, the Syrians won’t need enemies”

Thank you so much for saying this. No one else has said it, or even thought it, so it seems, in this whole debate. I find that if one sticks to sound principles, rather than taking sides, they end up on firm ground, rather than carrying water for those with a dubious agenda. The principle at play with Syria, and with much of the Middle East and the West’s approach to it, is one of Authoritarianism. I’m a U.S. citizen and I battle Authoritarianism at home every day, so I’m not about to take the side of brutal Authoritarians overseas. The way I see it, it’s Authoritarians versus Authoritarians, and Authoritarianism is the winner in this structure, regardless of what side wins the battle.

I have argued this point on the following blog, and have been censored and banned as a result. I was viciously attacked by the Hive Mind. They called me every name in the book. It was internet bullying at its best. The goal was to squelch freedom of expression and maintain group think at all costs. It’s despicable behavior.

Have seen that blog as well…the fact that they delete comments they disagree with tells me everything I need to know.

Well done — those questions do have to be raised and addressed.

It worries me when state entities such as the Saudi Arabia start calling for the arming of “the Syrian opposition” — which one? — and doing so in the name of human rights, no less.

[…] of International Freedom of Expression at the Electronic Frontier Foundation, writing in her personal blog, is careful to stress that criticism of coverage of Syria does not necessarily denote support for […]

this blog and some others, like the Angry Arab, is so concerned about media coverage that they seem to forget the main point: there is a regime that is a dictatorship, that kills and tortures its own people by the thousands, that promises reforms but does not act, that bombs its own towns. What’s the point of saying that there are bad people on the other side as well? sure there are, how can you overthrow a powerful regime being kind? The only important point is whether the regime should be overthrown or not. Once we agree on this, then we can discuss how and who is better suited to do the job and whether external intervention is needed or should be rejected, and whether the current opposition has enough consensus to set up a new government. The very fact that the Syrian regime does not allow journalists in is enough good reason to be biased against it.

This blog post might miss that point, but it’s meant to specifically criticize one element of the situation. Believe me, I have not forgotten that the Syrian regime is brutal.

The point of saying there are bad people on the other side, as well as pointing out the media bias, is because there are serious implications at stake: Do you want another Iraq? Another Libya? Don’t you think we should consider the reality on the ground as well as the reality of what the MAJORITY of Syrian people want? I’m all for Syrians taking down their autocratic regime, but I’m not necessarily for regime changed pushed from the outside; particularly when Syrians have witnessed firsthand the effects of that very thing on neighboring Iraq (you do realize that most Iraqi Christians fled to Syria, right? What happens when Sunni militants take over Syria?)

@WCIAJillian Hey Jillian, thanks for c

@C_LiveLaughL0ve Ok. Good to know. If I suddenly go AWOL you will know Jillian Michaels killed me. LOL

[…] regime, for example, whilst simultaneously questioning the dominant opposition narrative,” complains Jillian C York. “Those who dare search for truth are immediately labelled as being on one side or the […]